From the RuneScape Wiki, the wiki for all things RuneScape
Jump to navigation Jump to search
This article is about the events of the Elder God Wars. For the dungeon, see Elder God Wars Dungeon.
Symbols representing Jas, Wen, Bik and Ful.

The Elder God Wars was an ongoing main storyline, which started in February 2021, told through a range of content, from quests and miniquests to combat encounters released as a part of the Elder God Wars Dungeon. While the dungeon is the centerpiece of the narrative, the storyline concluded in April 2022.

While the storyline officially started with the release of Azzanadra's Quest, it is a direct continuation of the World Out of Time narrative arc, which culminated with Desperate Measures, and part of the overarching story of the Elder Gods and the threat of the Great Revision, which was established as a main narrative focus with Sliske's Endgame, although specific story elements were introduced as far back as The World Wakes. While many installments of the narrative have none or limited requirements, the players interested in the story are recommended to play them in the order of release and to complete the preceeding narrative content.

The Elder Gods have been referenced in a number of quests over the years, however the current main narrative began with The World Wakes quest which began the Sixth Age. The quest Fate of the Gods was the first to introduce much of the Elder Gods' lore and narrative elements leading to Elder God Wars storyline, as well as introducing the characters of Zaros and Seren, playing an important part in the story. The Light Within and Children of Mah expanded on those elements, while Heart of Stone focused on the aspect of Elder Gods waking on Gielinor and the first attempts to stop them. One of a Kind and Hero's Welcome introduce the dragonkin scientist Kerapac and his attempts to break the curse put on the by the Elder God Jas, binding them to the Stone of Jas. Sliske's Endgame, culminating much of the Sixth Age narrative, including the conflict between the young gods and the story of the Stone of Jas, introduced a new main storyline with its ending. The Elder God Jas confronts the World Guardian and burdens them with a task of proving to the Creators that mortal life deserves to exist.

The Needle Skips and Curse of the Black Stone introduce The Needle, an Elder artefact controlling time, and Kerapac's vengeance against the Elders, respectively. The storyline of the Elder Gods begins formally with Desperate Times, in which Seren forms the Council of Burthorpe, a gathering of the leaders of the Gielinor's people an wishes to work with them to show the Elder Gods the value of life. She wishes to appease them by creating an impressive garden, yet it becomes obvious that various groups cannot easily overcome their old grudges. The impass is resolved when Kerapac offers an alternative solution - using the Needle to keep the Elder Gods asleep. With the help of the World Guardian and the enchanter Charos he claims control of the Needle, but is revealed to have a more nefarious plan - the destruction of Gielinor and the Elder Gods with it, in exchange for the rest of the universe being able to survive. The storyline continued with the release of Anachronia, an ancient dragonkin domain brought back from the past by Kerapac, as well as in the Archaeology skill, including its pre-release teasers, introducing the mysterious monolith, an artefact activated by Zaros in the Archaeology Campus. Desperate Measures quest follows the attempts to stop Kerapac's plan, revealed to involve the release of the toxic shadow anima upon the world to poison and kill the Elder Gods, but also destroying all other life in the process. To this end, he uses a device generating the substance from the sleeping caste of Nodon dragonkin. While Jas is aware of the threat, she decides not to interfere, as Kerapac shielded himself in shadow anima, which would require the Elder Gods to cause a massive destruction in order to stop him. Willing to give mortals a chance to prove themselves, she offers an aid. Revealed by Charos to hold the shadow anima inside them due to Guthix machinations, the World Guardian is able to confront Kerapac and unknowingly allows Jas to bind him, and the Nodon, to herself once more. Soon after the Elder God Ful appears in the volcano and destroys the device. As revealed in Lore Hunter narrative activity, the outpouring of shadow anima, while stopped, caused lasting consequences to the life on Gielinor. Additionally the lore of the dragonkin, including Kerapac, the Nodon caste, as well as shadow anima is explored in Orthen Dig Site. One of consequences of Kerapac's actions was revealed in Raksha, the Shadow Colossus, where Raksha, an ancient beast infused with anathema from the myserious monolith, revealed to be the Codex, is awoken once more, after Zaros leaves with a container of the shadow anima, prompting the World Guardian to fight and contain the creature again. 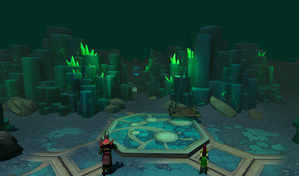 The Elder Halls are discovered.

The quest builds on the events from Desperate Times and Desperate Measures. Disappointed with the ineffectiveness of the Council of Burthorpe, which has been affected by Seren's aura, as well as the crystal goddess' focus on appeasing the current generation of the Elder Gods, Azzanadra sets out to fulfill a task given to him upon the return of Zaros - finding the Elder Halls on Gielinor. With the help of the World Guardian and Ariane, a seer, they investigate the Elder Halls on Freneskae, where the current universe began. They discover that the Elder Gods must touch their eggs to hatch them correctly, by imprinting their memories and identities, and that if the eggs were to hatch, they would instantly destroy all life. Azzanadra requests the World Guardian to meet with Trindine, a recently freed Mahjarrat and find a way to convince the White Knights to summon Saradomin, whose crown, an Elder artefact, could possibly locate the eggs. Before leaving the Halls, the adventurer discovers two voices in his head, providing a regular commentary of the subsequent events. Later, with the help of Sir Owen and against the obstructive bureaucracy, they summon Saradomin to Falador to request his help. While willing to give aid and regretting his absence, he informs that the Locator cannot be used to find the eggs.

The group meets in Kharid-et and splits to investigate different leads: Azzanadra and Ariane wish to confront the Kras of the Elder Gods, previously encountered during Xenia's plot, Sir Owen decides to find the elusive Sir Vey Lance, leader of the Temple Knights, while the World Guardian and Trindine search for clues in Wizards' Tower, Guthix' Hall of Memories and TzHaar City, where the creations of the Elder Kiln live. While the latter search proves ineffective, the World Guardian learns that Guthix had imbued them with the same enchantment he had used to create the Edicts, combining the anima from the Heart of Gielinor and the shadow anima from the Codex. He had also orchestrated his death at the hands of Sliske knowing that the Mahjarrat with a penchant for shadows would help that part of the World Guardian's enchantment grow. They also learn that the TokHaar tried to convince the TzHaar to return to the Kiln to serve the Creators once more. While TokHaar-Hok admits they created the Halls, he refuses to disclose their location.

When the group reconvenes in Kharid-et, they learn that Ariane managed to divine the location of the Halls following the destruction of Kras, and that they can be found in the Heart itself. Azzanadra, Ariane and the World Guardian head to the Heart, while Trindine looks for Sir Owen. In the Heart, now controlled by the elves, following the defeat of Sliske and withdrawal of the Zarosian and Zamorakian forces, they are confronted by Helwyr. As the hostilities grow, Gregorovic, Sliske's general, is drawn to the World Guardian and prompts a furious Helwyr to chase after him. Ariane uses a lava rune to imitate the TokHaar signature and the trio enters the Halls. Inside, they examine the eggs, finding them stable, but agitated by the release of anathema by Kerapac and likely to hatch in case of another dangerous outburst of energy. 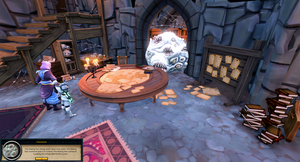 The Zarosian plot is revealed.

Azzanadra leaves in a hurry, prompting the World Guardian and the voices in their head to become suspicious and investigate the locations previously visited with Trindine. They learn she looked for information about Saradomins' crown and that she was following on an ancient heist conceived thousands of years earlier. With the help of Ariane, the World Guardian is able to witness Owen and Trindine finding Sir Vey Lance only to learn that the leader of Temple Knights is actually a Chthonian demon named Veilinius who infiltrated the Saradominist forces back in the Third Age in order to steal the crown. While undercover, he turned the Order of the Temple of Zaros into the Temple Knights and orchestrated much of subsequent history while waiting for further orders, while also making the inner circle of the order aware they serve another master. Trindine informs him that the heist is about to be pulled off after five thousand years and Veilinius suggests a ceremony which would create a perfect opportunity. They try to recruit Sir Owen, who refuses and is knocked out.

Ariane and the World Guardian hurry to the White Knights' Castle, where Saradomin conducts an ancient ceremony to strengthen the bond with his followers. The Zarosians blow the Frostenhorn, turning the initiated Temple Knights to their side and Azzanadra attempts to seize the crown. When he fails, Zaros himself intervenes and claims the artefact with ease, telling Saradomin that he may keep his kingdoms and that he should not seek retribution. The Zarosians and the knights reconvene in Kharid-et, where Zaros informs them his plan is about to be set in motion and that they should prepare for a conflict with Seren when they come for the monolith. Azzanadra expresses regret about having to betray the World Guardian, but warns them the next time they meet, it will be as enemies. After the Zarosians leave, Ariane decides to research the eggs further and the World Guardian suggests she seeks the help of Reldo, secretly the enchanter Charos.

The next chapter of the storyline released on 24 May 2021.

On 20 May 2021, at 17:00 UTC, the official RuneScape twitter account tweeted an animation of the Codex with the caption: "You have your responsibilities and I have mine. I will see you at the Monolith. When next we meet, it will be as enemies."; a quote from Azzanadra to the World Guardian at the end of Azzanadra's Quest.[2]

On 21 May 2021, at 09:00 UTC, RuneScape went live on Twitch and YouTube with the aforementioned animation of the Codex in loop and a 7-hour timer. Once the time was up, the trailer for the Battle of the Monolith premiered, and a livestream with Mods Hooli, Raven and Shrike announced the event.

The next chapter of the storyline, City of Senntisten, released on 21 June 2021.

The final chapter of the storyline, Extinction, was released on 4 April 2022.

An animated image of Ful, used to announce the Elder God Wars Dungeon at RuneFest 2019.

The Elder God Wars Dungeon was announced and discussed at RuneFest 2019.[3] The announcement occurred via an animation of Ful, in which a voiced narrator stated:

Mod Osborne stated in a press release that the Elder God Wars Dungeon will take place in a 'buried city'[4] and have skilling content.[5] Unable to confirm or deny whether the Elder God Wars Dungeon takes place in a buried city, Mod Jack stated that 'if' it did, they would want to include Archaeology in the exploration of the city in some way. [6]