The Elder Artefacts, also known as The Elder Twelve,[1] are a class of immensely powerful and divine artefacts that were created by the Elder Gods who used them as conduits for their power to carefully craft perfect details in their creations.[2] Most artefacts were created by Jas, the most powerful elder god, aligned to time, using her stone.[3] The Elder Artefacts can be destroyed and have been destroyed in the past by the Elder Gods, who destroyed previous versions of the Artefacts that did not meet with their approval. There may have been around 10 Stones of Jas, before the current and final version was created.[4] It was learnt from the Tribute to Guthix, wherein Guthix's memories could be read, there are twelve artefacts. At least seven of these are on Gielinor at the time of the Sixth Age.[5]

These artefacts are so powerful that merely spending time with one of the Elder Twelve artefacts will make it possible to attain godhood.[6] Each of the artefacts also has a specific function, though that function may or may not be what it's been used for by the gods. Some of the artefacts are called Elder Weapons, or God Slayers; the most well-known of these is the one referenced by Guthix: the Staff of Armadyl.

Jas did not imagine that other entities would get their hands on them, as she believed that the Dragonkin were the only living beings in the universe, and they had tied them all to the Stone of Jas - and so their side effects (that of leaking divine energy) may not have been considered. 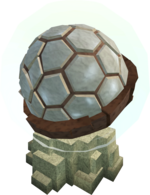 The Catalyst, commonly known as the "Stone of Jas," "The Eye of Saradomin," "The Fist of Guthix," or "The Cabbage of a Thousand Truths," was one of the better known artefacts. It was the most powerful, and the very first one created. It expresses the power of its creator; Jas, Elder Goddess of progression. She used it to create most other artefacts, aside from the Elder Kiln, the Measure, and possibly others. While not specifically a weapon, it grants its users part of its immense power.

It had guardians called the Dragonkin; a race enslaved and cursed by Jas to feel agonising pain when the Stone is being misused. When the Stone was misused, the Dragonkin were granted power equal to that was given to the user and were tasked to destroy them, making it one of the most risky artefacts to use. Throughout Gielinor's history, the Dragonkin have not been able to stop "False Users," but their power has since been supplemented, and thus they are nearing godhood themselves.[3]

The Stone has a long history of use and relocation. Notable users of the stone include Guthix, the Kethsians, Zamorak, Saradomin and Lucien. The Stone caused the existence of rune essence, Daeyalt ore and the Fist of Guthix.

Following Sliske's Endgame, the Stone of Jas was destroyed by Kerapac. Some remaining fragments are currently in the possession of the World Guardian.

The Siphon, commonly known as the "Staff of Armadyl", is the second most used artefact in the history of Gielinor (due to it being the second most powerful elder artefact), behind the Stone of Jas. It amplifies its user's magical capabilities and serves as a conduit for power in general. Used by the Elder Gods to fuse elements cleanly and with precision.

It was found by Guthix on Gielinor during the First Age when he was travelling between dimensions with his sword (see below). Guthix hid it before sleeping in the middle of the perfect world to let mortals enjoy a world without gods. It was found by Armadyl during the Second Age and became known as "The Staff of Armadyl". His followers adopted the symbol from the staff.[7] Notable users of the staff include Zamorak, Lucien, and Sliske. Two of the most important events in which the staff was involved were the banishment of Zaros and the death of Guthix.

During the finale of Sliske's Endgame, the World Guardian briefly gained possession of the Siphon and used it against Sliske, they lost it however when they were teleported away by Jas. In Desperate Times, it is revealed that Kerapac found the Siphon after the World Guardian had lost it, and is currently with him. 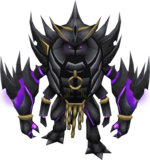 The Kiln, commonly known as the Elder Kiln, is both an Elder Artefact and a means of creating artefacts, and the artefacts it creates are considered to be the same artefact as the Kiln.[8] The most well known of these creations are the TokHaar, and the Mysterious statues. The TokHaar consider themselves to be Elder Artefacts, but it is debatable whether the Elder Gods would agree with this.

The Kiln was created by the Elder Goddess Ful on a planet different from Gielinor, where the Elder Gods attempted to create the perfect world. They failed numerous times and Ful would take the kiln and the TokHaar to the next project each time. When their work on Gielinor was done, the TokHaar built a great mountain around the Elder Kiln and returned to live within it "to await further instruction".

According to the TokHaar, younger gods are beings that abused the artefacts of the Elder Gods in order to gain a massive amount of power. To date the TokHaar are also the only known sentient artefacts, instead of just being an object. When a TokHaar dies, they return to the lava. Anything else that falls into the sacred lava is resurrected as TokHaar as well.

The Blade is known as "Guthix's Sword". After picking it up when Skargaroth dropped it during the Naragi God Wars, Guthix used it to wound Tuska and kill Skargaroth, making him ascend to godhood. He then used the sword to cut portals between worlds, allowing him to create the World Gate. Used by the Elder Gods to separate elements cleanly and with precision.

The Elder Sword currently lies shattered in Guthix's Cave, too dangerous to be used and still crackling with energy.

The Locator, known as the "Crown Archival", is an artefact that enables the user to locate all the other artefacts, but also enables the users of these other artefacts to locate the crown in return, making it one of the most useful and risky artefacts to be used. The Elder Gods discarded the crown fairly quickly and never meant to use it again, apparently no longer deeming it necessary to be able to locate their artefacts.[9] The Crown also attracts the attention of the Elder Gods, in case it itself gets lost.

The Crown is in possession of Saradomin, and has been since before the Naragi God Wars up to the present.

Upon his arrival on Gielinor, Guthix started to explore the world and found several Elder Artefacts. One of these discoveries was a horn, which he kept hidden. It came into the possession of Quin,[10] a powerful seasinger and self-proclaimed goddess in The Pincers region of the Wushanko Isles.

There has been speculation that it could be the Frostenhorn but this has been confirmed as false.[11] This may have been the "drinking horn" that turned Marimbo into a goddess.

Used by the Elder Gods to communicate with the TokHaar and control them. The Horn's current location is unknown.

The Measure is an elder artefact that measures the level of the Anima Mundi of a plane. This artefact is considered the weakest of the twelve, and is hinted at being created by the previous cycle of Elder Gods.[12]

The Measure is now in the hands of the World Guardian, after being taken from Freneskae.

The Mirror is a weapon in the hands of the Dragonkin used to duplicate items. It is used by Sakirth to kill V during Hero's Welcome. Kerapac retrieved it from the Vault of the Dragonkin, and it is presumably still in his possession.

The mirror was used by Kerapac to destroy the Stone of Jas during Sliske's Endgame.

The Needle is an artefact that can be used to unravel time itself, creating Threads of Time out of concentrated anima from that reset timeline. These threads can then be woven back into the tapestry of existence, growing fate itself. These rewoven threads can then be used to create more of themselves as the anima of the world is once again increased in this reset timeline. This creates a cycle where the world's anima gradually and purposefully restores and improves itself with each reset. It was one of the artefacts that Jas mentioned in Sliske's Endgame.

While the Needle can be used to rewind time further than 30 days, doing so causes the user to be permanently bonded to the elder artefact, resulting in physical transformation and a loss of all memories prior to its use. Furthermore, the Needle can also be used to indefinitely pause and restart time by saying the pausing phrase "Wenla".

Guthix describes the Needle as broken in one of his hidden memories in the Hall of Memories and that it is one of the major threats to the universe and existence. It was in custody of Gail, until Kerapac took hold of its power at the end of Desperate Times. A shard of the needle is currently in the possession of the World Guardian.

The Codex was one of the three last unknown artefacts until their first mention during Sliske's Endgame. Nothing is known about it.

Like the Codex, the Hammer was first mentioned during Sliske's Endgame. Nothing is known about this artefact.

Like the Codex and the Hammer, it was mentioned in Sliske's Endgame. Only its name is known.

It was long thought that the Stone of Jas was the only item that belonged to the Elder Gods (or only Jas, since there was no confirmation at the time as to whether more existed or not). In a lore livestream, Mod Osborne confirmed that the other six artefacts are to be revealed soon.[1] One of these was thought to be the World Gate, since it has been hinted to be an Elder Artefact by Mod Jack.[13] However, it is only linked to the Elder Sword.[14] Furthermore, the World Gate was created by Guthix, and hence, cannot be an Elder Artefact.

In addition to this, Mod Osborne stated that the majority of the Elder Artefacts are currently on Gielinor.[5] This was stated before The Measure was taken from Freneskae. Therefore, apart from the seven known artefacts, there has to be at least one more on Gielinor. He has also confirmed that at least one of the Elder Artefacts is located in the Kharidian Desert.[15] In addition, Armadyl ascended to godhood with an unknown Artefact that is likely still on the Aviansie world of Abbinah, although what it is has not been revealed.

During Sliske's Endgame, the remaining artefacts were revealed to be the Codex, the Template and the Hammer. Other than their names, nothing is known about them.

It has been mentioned that certain inferior prototypes of Elder Artefacts exist. This creates the possibility of there being more artefacts than the main twelve. This also means that any of the currently known artefacts could be one of these prototypes, with more of the main twelve still to be revealed.