From the RuneScape Wiki, the wiki for all things RuneScape
Jump to navigation Jump to search
The Old School RuneScape Wiki also has an article on: osrsw:Ed Wood
Ed Wood? (edit)? (edit) 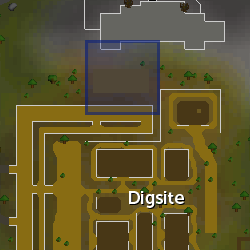 If players tried to talk to him, one of the below messages appeared over his head:

Ed Wood was briefly removed on 20 May 2019 after the Digsite update, but returned a month later on 24 June with the Breaking the Storm update.

With his return with the Breaking the Storm event, he has new dialogue, as he helps to chop the Enchanted Trees.

When an enchanted tree became verdant, he would say one of the following:

When an enchanted tree became wilted, he would say one of the following:

Once the event finished, he could be talked to by the empty tree plot.