From the RuneScape Wiki, the wiki for all things RuneScape
Jump to navigation Jump to search
Ed? (edit) 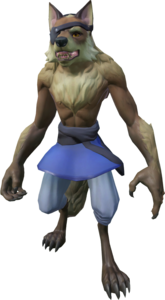 Ed, actual name Edd, is a werewolf involved in the 2021 and 2022 Halloween events. He has a romantic relationship with Greg, a werewolf guarding the border between Misthalin and Morytania. Ed is supposedly described by Greg as a "wolf with lustrous brown fur" and is implied to have been taken a liking by him.[1]

Alex, Greg's co-guard, attempts to set Greg up with Ed, to which his colleague reacts by jokingly threatening to kill him.[1]