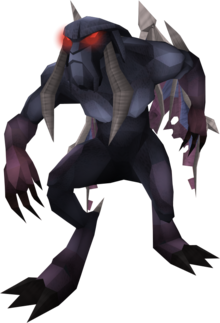 Nezikchened is a level 84 black demon lord that must be fought at three different times in order to complete the Legends' Quest. He is stronger than other black demons and will use magic and melee attacks depending on your proximity to him. He can drain your Prayer points to 0, but only when your battles with him start. Like all demons, he is also weak to Silverlight, Darklight, and holy water. He has a very peculiar habit of calling the player 'Vacu'. It is revealed during the quest that 'Vacu' was the name for the evil priests who served the 'demons of the underworld' (as according to Ungadulu, the Shaman that you rescue earlier on in the Legend's Quest).

Nezikchened is fightable as a class B boss monster in the Dominion Tower minigame if the player has completed the Legends' Quest.

Nezikchened has possessed Ungadulu, the shaman of the Kharazi Jungle. Players must use the book of binding on him to reveal his true form. He will then drain the player's prayer points and use melee on them. He can be easily defeated if they drink a prayer potion and then use Protect from Melee/Deflect Melee. Attacking him with Silverlight, Darklight, or throwing a vial of holy water at him can weaken him. This is thought to be the easiest of Nezikchened's three phases, as it is very predictable and only one prayer will be needed. If you do not defeat him fast enough, he will de-pop and you need to start over.

Nezikchened appears again disguised as the ghost Echned Zekin, an anagram for Nezikchened, and will ask players to kill the spirit Viyeldi. Players who do so will save time but will have to fight Ranalph Devere, Irvig Senay, and San Tojalon at the final part of the quest. Players who do not kill Viyeldi will not have to face these foes, and will receive a holy force card from Ungadulu. Whichever path they choose, when players return to Echned Zekin, he will turn into Nezikchened and fight the player. This time he drains the player's prayer unless they use the holy force spell card on him. He uses a weak magic attack at first, then switches to melee. This fight is relatively similar to the first one in terms of difficulty.

At the end of the quest, players must fight the demon one last time. He uses a powerful magic attack and melee, and he drains prayer at the beginning. A possible way to defeat him involves drinking a prayer potion, using Protect from Magic, and hiding in the trees with a ranged weapon.

If players chose the "short" route during the quest, he will also summon Ranalph Devere, Irvig Senay and San Tojalon to attack the player.

After the player has delivered the final blow to Nezikchened, he will exclaim "I am beaten by a mere mortal...I will revenge myself upon you!" and the player automatically and sarcastically responds "Yeah, yeah, yeah. Heard it all before" right before Nezikchened bursts into flames and dies as he burns into ashes.

Nezikchened uses two attacking styles; melee if you are close-up and a black magical attack from a distance. The demon is somewhat resistant to magic and ranged and if a player takes too long while in combat, he will teleport away, forcing you to restart the battle. Melee attacks with a dragon weapon and Protect from Melee turned on work well in dispatching him quickly. Some prayer potions are necessary to fight Nezikchened because he will drain your prayer points to ten times the first digit of your Prayer level at the beginning of each battle. (An example of this would be if you had 400/700 prayer points, you would have only 40 Prayer points left.) It is recommended the player keep their life points above 300 at all times.

Nezikchened uses his Prayer drain in only one hit, and it is at the beginning. You will still have enough prayer points to use Protect from Melee for a few seconds, the player should drink their prayer potions during this time. The demon's Defence is not very high, so the player will be able to defeat him without using many potions.

The demon can use magic attacks in this fight. However, he very rarely uses it, so Protect from Melee can be used throughout the battle, as long as you have some food.

This is the hardest battle. At first, Nezikchened gets 5 free strikes at you, but the damage can be reduced with prayer. After that, if you are using melee, he won't use magic attacks, so Protect from Melee can be held. However, the few times that Nezikchened usually hits for full damage through Protect from Melee tends to be in this last battle.

The update history project is a work-in-progress – not all updates to this topic may be covered below. See here for how to help out!
Retrieved from ‘https://runescape.wiki/w/Nezikchened?oldid=35268978’
Categories:
Hidden categories: