From the RuneScape Wiki, the wiki for all things RuneScape
Jump to navigation Jump to search
This article is about the character in A Christmas Warble. For the book character, see Ebenezer.
Ebenezer Scourge? (edit)? (edit)

Ebenezer Scourge, called Ezeneser Scourges by snow imps,[1] is a Christmas-hating dark Zamorakian wizard involved in 2009 Christmas event. Scourge kidnapped Santa Claus, and ruined the Queen of Snow's feast by stealing all the food and imprisoning Santa Claus. Later in the quest, the Queen of Snow revealed that, in the past, she had met him by accident, but he had seemed extremely kind. He explored the Land of Snow with her, and she fell in love with him.

Later, however, while working with magic, Scourge teleported away by accident. He later returned to the Land of Snow, but she rejected him because she had heard of his evil acts and had already left him for Santa Claus. He vowed revenge and left. Recently, he moved back into the Land of Snow and put his plan into action by ruining the Christmas feast, only repenting after the player convinced him that he must change. Now he is a "changed man", "happily" enjoying the Christmas feast and festive spirit.

Although Ebenezer Scourge is supposed to have truly repented, he seems to only to be motivated by fear. If spoken to without wearing the full Ghost costume, he will seem "forced" and still slightly annoyed. However, when spoken to as a "Christmas ghost", he will act extremely fearful. 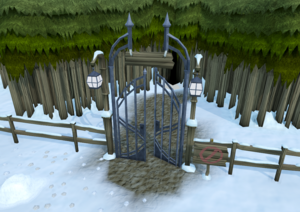 The gate to Ebenezer's mansion.