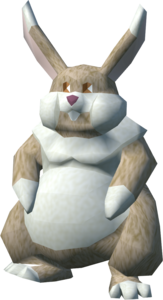 In the 2010 Easter event, now having taken over his father's job, he needed help distributing Easter celebrations to the various different races and cultures of RuneScape, as he had been modernising the factory and had ambitious plans that he was unable to fulfil. With the player's help, he was able to meet the order and get his plans back on track.

In the 2011 Easter event, the Easter Bunny could be found arguing with Jack Frost at the annual battle between Spring and Winter. For players who fought on the side of spring, he gave out bronze hatchets and tinderboxes to help cut down the evil holly trees.

The following takes place during A Fowl Easter.

During the 2012 Easter event, the Evil Chicken and Chocatrice claimed that the Easter Bunny had met with an accident and was in hospital recovering. The details of this accident are contradictory, as one claims that he fell down White Wolf Mountain while the other claims that he fell into a pit of lava. Nevertheless, he was apparently able to hide eggs around Gielinor before the accident occurred.

During the 2015 Easter event, imps had overrun the Easter bunny's hole in attempt to get one of the pet jadinkos that the Easter bunny was breeding. The player had to use the egg machine to breed the perfect jadinko for Ringleader Vyvyan so the Easter bunny could get back to his work.

The following takes place during Sliske and the Chocolate Factory.

Suspicious of Sliske's motives, he tells the player how to get rid of the other tourists without arousing suspicion on themselves. When they reach the T.A.R.A. room, the Easter Bunny is surprised that he never thought of a chocolate duplicator before. When Sliske reveals that he turned the tourists into wights, the Easter Bunny tells the player that they should give them an overdose of the chocolate to return them back to normal. He stays behind with the other tourists after Sliske escapes and asks the player to dismantle Sliske's machines before they fall into the wrong hands.

The following takes place during The Cotton Tales.

During the 2017 Easter event, the Easter Bunny is lamenting about his father's absentmindedness leading to the mislaying of several presents. He hands the player a list of cryptic notes made by his father and asks them to track the presents down. After obtaining divine eggs from Falador, Draynor, Dwarven Mine, Taverley and Burthorpe, the note reveals that the Easter Bunny set up the trail in order to test his son and leaves him a final message. He thanks the player and hands them a reward for their help.

The following takes place during The Guilded Eggstravaganza.

During the 2019 Easter event, the Easter Bunny, along with Duke Horacio and King Roald, throws an Eastertime Fete as a celebration of both Easter and Spring. Several guilds are also invited to take place in a competition to use their skills and show off their guild's best way to represent celebrating Easter. The winning guild would be awarded a mysterious egg. However, several of the guilds' apprentices need the player's help to complete their entry. The player helps the Cooks' Guild Apprentice make a lemon pie, the Fishing Guild Apprentice make a swordsharkahuna, and the Crafting Guild Apprentice make a Gilded imperial egg. The player then chooses which guild wins the competition, although when the mysterious egg turns out to be alive, the Easter Bunny awards it to the player instead.

During the 2020 Easter event, imps have stolen the Easter Bunny's eggs, and the player must find and return them to him.

This information has been compiled as part of the update history project. Some updates may not be included - see here for how to help out!
Retrieved from ‘https://runescape.wiki/w/Easter_Bunny_(Junior)?oldid=35732270’
Categories:
Hidden categories: