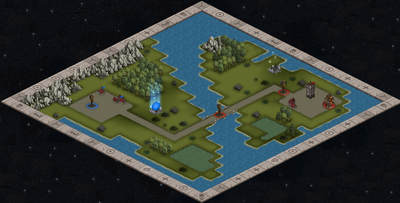 Eastbridge as at appears in armies of Gielinor

Eastbridge was a small village established during the cataclysmic Third Age and a point of combat during the time. It has since presumably been destroyed, and thus has not seen in RuneScape. It is, however, a point of play in the FunOrb game Armies of Gielinor.

Eastbridge was apparently a village settlement built on a small islet off the coast of an unknown region, although it was likely within one of the wooded areas that are now Misthalin, Asgarnia, and Kandarin. It was occupied at one point by barbarian and rogue TzHaar forces during an unlikely alliance, but was later conquered. Consisting of small huts and a central fortress, Eastbridge was a key strategic point in the region, but did not survive the God Wars.

After the battle Eastbridge either expanded, or another area of the city got attacked by a far larger army consisting of multiple barbarians, goblins, Zamorak mages, Saradomin owls and Saradomin rangers and even a King Black Dragon. Eastbridge managed to once again be victorious after a long battle.