From the RuneScape Wiki, the wiki for all things RuneScape
Jump to navigation Jump to search
The Old School RuneScape Wiki also has an article on: osrsw:Earth altar
Earth altarEarth ruins? (edit)? (edit) 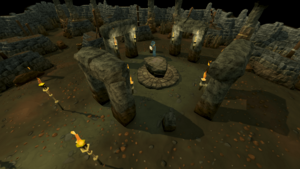 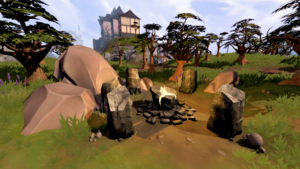 The Earth altar may be found north east of Varrock and south of the Lumber Yard. It is used to craft Earth runes from rune essence or pure essence, providing 6.5 Runecrafting experience.

The fastest way to get there is the Wicked hood's teleport, which could only be used 2 times a day, or 3 if all the Wicked robes have been purchased from the Runespan. The second fastest way is to break an earth altar teleport tablet. Both of these methods teleport the player just outside of the altar. The wicked hood can be obtained by talking to Tam McGrubor, and the teleport tablets by playing the Great Orb Project. In addition, Lumber Yard Teleport scrolls teleport the player to just northwest of the altar.

The Archaeology journal, which can be equipped in the pocket slot, offers unlimited free teleports outside the Archaeology Guild, and the Earth altar is a 30-second run to the north.

For banking purposes, the Infernal Source Dig Site to the northwest of the Earth altar is a 17-second run away.

The maximum likely limit for crafting Earth runes in one visit is 1,012. This would be achieved by having 78 Runecrafting, giving a 4x bonus, and carrying 253 essence to craft (23 in the normal inventory along with 48 in the 5 sizes of Runecrafting pouches, along with 175 claimed from the wicked hood (if all the Wicked robes have been purchased, and 7 from any abyssal summoning creature), whilst wearing an explorer's ring (which has a 1 in 10 chance of producing an extra rune per essence). The maximum possible experience is 3,289 obtained doing the above while wearing Earth runecrafting gloves.

It is possible to make Mud runes, Dust runes, and Lava runes while at this altar, but at a 50% success rate. This will result in less runes than normal being made. To make a combination rune, the player needs one set of elemental runes, a stack of pure essence, and 2 talismans.

An earth tiara may be created at this altar by having an earth talisman and a normal tiara in your inventory. The player must use the tiara on the altar. Doing so will earn 32.5 Runecrafting experience.