The Obelisk of Earth is used to cast the Charge Earth Orb spell. The spell is cast on the obelisk in order to charge an unpowered orb into an earth orb. The obelisk is located in the Wilderness area of Edgeville Dungeon.

As there are poison spiders near the obelisk, it is advised to bring a method of combating poison, such as a Prayer book (available during and after The Great Brain Robbery, not to be confused with a God book) and holy symbol, the Anti-poison totem, or the poison purge aura. Using the prayer book is not recommended as the player would be repeatedly poisoned again and suffer heavy prayer drain. A poison purge aura is possibly the best method, as it has no requirements, is bought with freely obtained Loyalty points, and also helps heal damage that the spiders or other creatures could deal. However, it has a short time limit. The anti-poison totem requires 60 Defence, 60 Dungeoneering, and 70 Herblore to equip and costs 44,000 Dungeoneering tokens from the Rewards trader but has no limit to its use.

Antipoisons can be used at the bank for poison immunity and preservation of inventory space; however, each dose lasts 86 seconds. 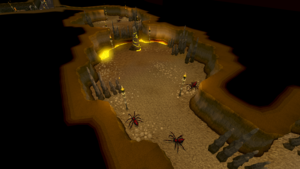 The obelisk in the dungeon.
v • d • e
Edgeville Dungeon

This information has been compiled as part of the update history project. Some updates may not be included - see here for how to help out!
Retrieved from ‘https://runescape.wiki/w/Obelisk_of_Earth?oldid=35701536’
Categories:
Hidden categories: