Earning potential (or EP) was the potential rate of a player earning a valuable drop from someone else on a PvP or Bounty world. 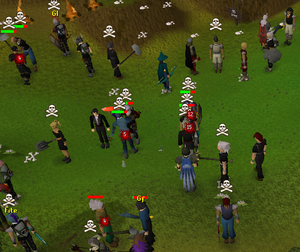 Earning potential could be obtained by standing away from a safe zone in a Bounty world or PvP world, at a rate of 25% per 30 minutes in a hotzone, and 10% per 30 minutes in a coolzone, when risking at least 25,000 coins in Free-to-play or 75,000 coins in pay-to-play. Note that this didn't necessarily have to be all at once, you could hop in and out of the safezone without the 30 minute timer resetting. Only full minutes (60 seconds) would be counted towards the 30 minute timer though. Items kept on death did not count towards the risk.

A good tactic was to use a BH+1 world, holding a single treasure trail item (high value, low keep precedence) and a single thrown weapon in auto retaliate, F2P may have been able to do this using a trimmed mage piece and the exact runes for a single spell cast, on autocast. The idea is that until attacked, the expensive item was at risk, and then by auto retaliate, the player discarded the item of lower value but higher keep precedence. However, occasionally players could farcast you (ancient magicks involving ice spells) and you could have ended up being too far away to retaliate, causing the more expensive item to be lost anyway. Using this method, a player only had to check the screen every 5 minutes or so to keep from being logged out. A good method to getting fast earning potential in both F2P and P2P was to teleport to Daemonheim, and then hide on one of the edges towards the outside where there are normally few to none players. If you did this, you still had to check your screen every 5 minutes to keep from being logged out.

Some good locations for freeloading in PvP worlds were: Lletya, Ape Atoll and Crash Island, Kharazi Jungle, Meiyerditch, the Poison Waste, Daemonheim, Dragontooth Island, and the Land of Snow.

Raising your earning Potential anywhere outside a 'hot zone' was capped by a 40% limit in cool zones. It was possible to have more than 100% EP, by having at least 29 EP on a pay-to-play world, then hopping to a F2P world, where it is multiplied by 3.5.

A popular way to gain EP was to put items risking 76K or higher into a familiar such as a Spirit Terrorbird and when about to die, dismiss it. This way when you come back your items will be back on the ground where you left them. However it is hard to dismiss a familiar while in combat, because the dialogue is interrupted. This can no longer be achieved.

One of the best ways to gain EP without wasting time was to do a skill that can be done in a desolate area like hunting or fletching. Woodcutting may be done at the sawmill which is a hotzone so this is highly recommended for players who want to train their woodcutting and get EP.

Using fun weapons like Easter carrot or casting strike spells from the standard spellbook would not gain EP. They were once popular methods because both players, with a low enough magic attack bonus, will always splash each other and never deal damage.

Two players could still wear armour with high defence and use bolt spells or hit each other with extremely weak weapons (excluding fun weapons) such as bronze swords.

Having a high earning Potential was extremely helpful for receiving Ancient artefacts that were released in the 16 June 2009 update. Artefacts could be sold to Mandrith in Edgeville bank or Nastroth in Lumbridge castle courtyard for up to 5 million coins.

If you teleported away from a battle, excluding through the use of the Ring of life, you'd lose 1/5 of your current EP. This was probably implemented to discourage players from teleporting to avoid dying, which is highly frowned upon.