From the RuneScape Wiki, the wiki for all things RuneScape
Jump to: navigation, search
The Old School RuneScape Wiki also has an article on: osrsw:Eadgar
Not to be confused with Edgar.
Eadgar? (edit)

Eadgar, sometimes known as "Mad" Eadgar, is a human who normally lives in a cave at the summit of Trollheim, a mountain deep within the Troll Country. Because of this he is always getting caught by the trolls and being thrown in the Troll Stronghold prison, where players can release him during or after the Troll Stronghold quest. He does not seem to worry about the trolls, because he claims that he is too old for the trolls to eat him. Once freed he will return to his cave.

Eadgar plays a major role in the Eadgar's Ruse quest, as he helps the player produce a fake human to give to Burntmeat in exchange for the location of the trolls' goutweed stores. To ensure that Burntmeat cannot lie, Eadgar also tells the player how to produce a troll truth serum that is slipped inside the "human" when Burntmeat eats it.

Eadgar will give players a bowl of stew in exchange for some logs that he can use for firewood. 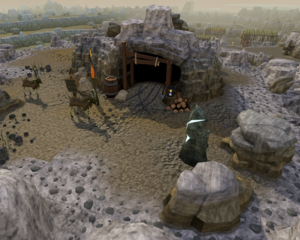 Eadgar's cave, located at the summit of a hill 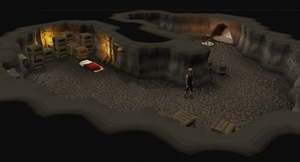 Eadgar, wandering around in his cave