From the RuneScape Wiki, the wiki for all things RuneScape
Jump to: navigation, search
Item JSON: {"edible":"no","disassembly":"yes","stackable":"no","stacksinbank":"yes","death":"never","name":"Dwarven siege engine","bankable":"yes","gemw":false,"equipable":"no","members":"yes","id":"51791","release_date":"26 July 2021","restriction":"surface","release_update_post":"This Week In RuneScape: Elder God Wars Dungeon - The Nodon Front","lendable":"no","destroy":"Your item will be destroyed permanently and it may not be reclaimable.","highalch":false,"weight":2,"lowalch":false,"tradeable":"no","examine":"Inspired by Nodon tech.","noteable":"no"} 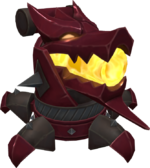 Unlike the other cannon upgrades from the Nodon Front, this provides a cosmetic change as well as a 100% increase to damage output.

If lost, you can reclaim it from Nulodion, located near the entrance to the Dwarven Mine south of Ice Mountain.

This information has been compiled as part of the update history project. Some updates may not be included - see here for how to help out!
Retrieved from ‘https://runescape.wiki/w/Dwarven_siege_engine?oldid=35569693’
Categories:
Hidden categories: