The Dwarven mines are a large dungeon in Asgarnia containing a number of mines, with entrances south of Ice Mountain and in Falador. The nearest banks are in eastern Falador, one north of Falador entrance and one to the east in the Artisans' Workshop. Additionally, there are bank deposit boxes located in the Dwarven Mine resource dungeon and in the Living Rock Caverns.

Players with level 60 Mining or higher may access the Mining Guild through the door in the southernmost part of the mine. Near the entrance are scorpions and king scorpions, aggressive if players have a combat level below 79.

The main entrance to the Dwarven Mine 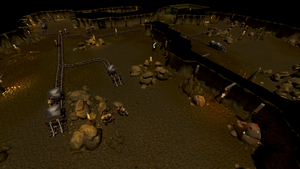 The north end of the Dwarven Mine.

The following mines are located directly within the dungeon:

In addition, the following mines can be accessed by going deeper into the dungeon:

There are several shops in the Dwarven Mine: