From the RuneScape Wiki, the wiki for all things RuneScape
Jump to navigation Jump to search
Item JSON: {"edible":"no","disassembly":"no","stackable":"yes","stacksinbank":"yes","death":"alwaysinclwild","name":"Dwarven challenge barrel","bankable":"yes","gemw":false,"equipable":"no","members":"no","id":"33745","release_date":"15 December 2014","release_update_post":"Snowboarding & Tirannwn Task Set","lendable":"no","destroy":"You will not be refunded if you destroy this item.","highalch":false,"weight":0,"lowalch":false,"tradeable":"no","examine":"This can be used to show off your combat prowess.","noteable":"no"}

A dwarven challenge barrel is an item that can be bought from Solomon's General Store for 20,000 Loyalty Points in a pack of 10. It acts as an attackable combat training dummy that does not give experience. It does not transfer adrenaline to actual combat and cannot be used in banks or player versus player areas.

When planted, the dwarven challenge barrel gives the option of allowing only the owner or all players to attack it. For three minutes the damage done to the barrel will be tallied. The time is shown in a bar above the barrel.

After the three minutes pass, the dwarf pops up from the barrel and he can be used to open a window displaying a highscore table of damage dealt, including names, attack style and damage-per-minute.

Any remaining barrels can be used to output the highest damage that the owner has inflicted on a dwarven challenge barrel in three minutes. 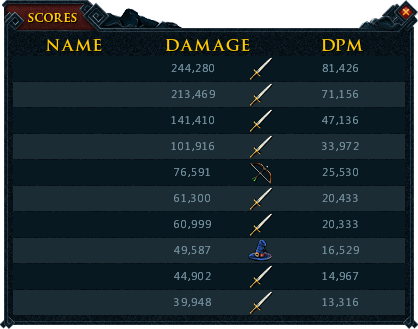