The Dwarf squad (heavy) was an item used in Mobilising Armies. When used during a game, it became a squad of dwarves. They used melee, which means they are weak against Elf squads and dominant over Goblin squads. They have a combat level of 350, 10,100 life points, and level 60 discipline, but they moved at half the speed of light dwarf squads. They wore a brown dwarf outfit carrying a black battleaxe with silver blades, and finds ores, gems and coins while exploring. If they died during a game, the item will become a Dwarf squad (heavy) (defeated). 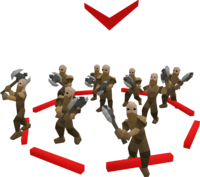 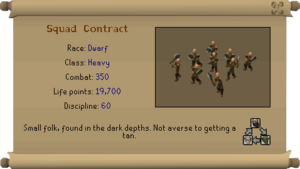 This information has been compiled as part of the update history project. Some updates may not be included - see here for how to help out!
Retrieved from ‘https://runescape.wiki/w/Dwarf_squad_(heavy)?oldid=35642783’
Categories:
Hidden category: