From the RuneScape Wiki, the wiki for all things RuneScape
Jump to navigation Jump to search
For other uses, see Dwarf (disambiguation). 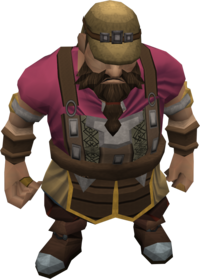 The Dwarves are one of many races in RuneScape. They live predominately in Keldagrim, their capital city, but are also found in various mines and settlements across Gielinor. In stature, Dwarves tend to be shorter than humans, usually being slightly above human-waist height, but considerably stockier. They are long-lived, although they tend to be gruff and short in temper. They are particularly fond of ale and often have long beards. Dwarves are particularly well known for being excellent blacksmiths, miners, and craftsmen, but usually a dwarf specialises in one area. Dwarves primarily use power-based weapons in combat, such as battleaxes, warhammers and crossbows.

During the First Age, dwarves were most likely one of the first races brought by Guthix to Gielinor. They are possibly related to humans and gnomes. The dwarves probably lived on the surface, in villages like the humans did.

However, the God Wars sent the dwarves underground. During the God Wars, most dwarves hid themselves beneath the surface. Over time they constructed Keldagrim, a massive city that has grown tremendously wealthy. Dwarves adapted to underground life in this time. There they also encountered hostile trolls, resulting a series of conflicts collectively called Keldagrim - Troll Country War which continues today.

Dwarves are capable of using magic. Zamorak, who looked towards the dwarves as a way to supplement his armies, unintentionally cursed their magical talent, which slowly turned them into chaos dwarves, mindless dwarves who were feverently loyal to him. In order to stop the curse, the council of elder magi suppressed the magical capabilities of every dwarf, which caused chaos in the community. Powerless, they appointed a king and gave him absolute authority to crush the uprising. This resulted in the dwarves losing the ability to cast any magic. The Imcando dwarves were unaffected by the curse, as Saradomin protected them from it. However, Fremennik barbarians slaughtered many of them, believing the use of magic was an affront to the gods.

During the Fourth Age (although Dwarves use different ages to humans) King Alvis created the Consortium, a collection of mining companies. It was originally intended to help the Kings rule, but by King Alvis's death it had become powerful and took over Keldagrim. This occurred approximately 500 years before the present date.

Only after thousands of years, during the end of the Fourth Age or beginning of the Fifth Age, did the dwarves return to the surface to find the wars over. They began establishing ties with both the gnomes and humans, enjoying the benefits of their mining and smithing industry. Most dwarves still remain underground, albeit a few have made permeant residence on the surface.

Dwarven culture consists mostly of feasting, sparring, and songs of great deeds long ago. The dwarven capital of Keldagrim is more advanced, and has many industrial works, banks and trading corporations. Dwarves love gold, and value it greatly; they are portrayed as greedy, which is not untrue - their people are ruled by merchants and bureaucrats. Nearly all activities in Dwarven territory, particularly Keldagrim, are based around the acquisition of wealth.

The dwarves are not religious, and although they are Guthixian, they never really worship Guthix in festivals or rituals. It's shown in the Doric and Boric tasks that burial armour is an armour which is made for fallen Dwarves in smithing to be buried with, so that they may smith in the afterlife. There is also a small and secretive cult of dwarves in the wilderness and in Taverley dungeon known as the chaos dwarves, who worship Zamorak, due to being affected by his curse. 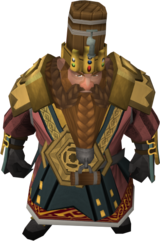 The Drunken Dwarf as the King of Keldagrim.

Dwarves are one of the 'races' who have champions of champions in the Champion's Challenge distraction and diversion. It is not currently possible to fight the dwarf champion.

Wikipedia also has an article on: wikipedia:Dwarf (mythology)
Retrieved from ‘https://runescape.wiki/w/Dwarf_(race)?oldid=35459857’
Categories: