From the RuneScape Wiki, the wiki for all things RuneScape
(Redirected from Dungoneering floors)
Jump to navigation Jump to search 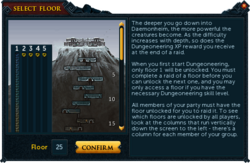 Creatures that can be encountered on any floor include:
forgotten mages, forgotten rangers, forgotten warriors, giant rats, mysterious shades, plus the various breeds of Bovimastyx. Mercenary leaders can also be encountered at any floor, because it is a challenging puzzle room, not like a creature you would encounter only on that floor.

Each theme has a Stalker, Behemoth, and Kal'gerion demon boss, and all but the abandoned floors have a humanoid boss in it, though the Unholy cursebearer might have been a human before.

Floors 1 to 11 (requires level 1-21 Dungeoneering and 0-5,018 Dungeoneering XP) of Daemonheim have the Frozen theme. The blue-white decor is filled with snow and ice, and the "Glacialis" music tracks are unlocked. Fire spells are useful in these floors, as the bosses do not share a distinct weakness.

Creatures that can be encountered on a Frozen floor include: (members-only ones are marked with (m))
frost dragons, hydras, ice elementals, icefiends, ice giants, ice spiders, ice trolls, ice warriors and thrower trolls.

The icy pressure pad puzzle can only be encountered in Frozen floors.

Floors 12 to 17 (requires level 23-33 Dungeoneering and 6,291 - 18,247 Dungeoneering XP) of Daemonheim have the Abandoned theme. The decor is greenish-grey and the "Desolo" music tracks are unlocked. These are the first floors where antipoison may be required.

Floors 18 to 29 of Daemonheim (requires 35 to 57 Dungeoneering and 22,406 - 203,254 Dungeoneering XP) have the Furnished theme. The decor is grey and the "Adorno" music tracks are unlocked. A Dungeoneering level of 35 is required to access the first of these floors.

Creatures that can be encountered on a Furnished floor include: (members-only ones are marked with (m))
brutes, cave slimes(m), dungeon spiders, giant bats, guard dogs, jellies(m), iron dragons, night spider(m), and pyrefiends(m).

The sleeping guards puzzle can only be encountered in Furnished floors.

The seeker sentinel puzzle can only be encountered in Abandoned floors. 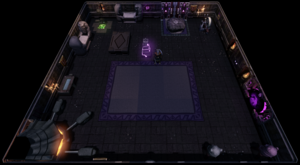 Floors 36 to 47 (requires 71 to 93 Dungeoneering and 814,445 - 7,195,629 Dungeoneering XP) of Daemonheim have the Occult theme. They were released on 19 August 2010. A Dungeoneering level of at least 71 is required to access the first of these floors. The decor is purple and the "Occulo" music tracks are unlocked. It contains six new boss monsters, which are "some of the most vicious boss monsters found in the entirety of Daemonheim". As with all previous floors (frozen, abandoned, and furnished), the types of bosses found in these floors include a stalker, behemoth, demon, and a mage. Free players cannot access the Occult floors.

Boss monsters that can be faced at the end of each Occult floor in this set are:
Yk'Lagor the Thunderous, Gravecreeper, Necrolord, Flesh-spoiler Haasghenahk, Runebound behemoth, and Skeletal trio.

The coloured bookcases puzzle can only be encountered in Occult floors.

When the Occult floors were first released, there was a glitch that allowed free players with 71+ Dungeoneering to access them. The glitch was later fixed.

Starting out on a warped floor.

Bosses that can be faced at the end of Warped floors are:
Blink, Warped Gulega, Dreadnaut, Hope devourer, World-gorger Shukarhazh, and Kal'Ger the Warmonger.

The portal maze puzzle can only be encountered in Warped floors.

With the Dungeoneering Spotlight update, the option to skip floors on the current prestige cycle with tokens was added to the Rewards Trader. The cost to do so varies based on Dungeoneering level and floor level. More details and a calculator can be found here.