From the RuneScape Wiki, the wiki for all things RuneScape
< Dungeoneering token
Jump to: navigation, search

It is highly recommended to use Magic or Ranged inside of the Temple of Aminishi. If you use melee, you will take a lot more damage, since you will take hits from all three sides of the combat triangle at the same time. Melee users are most at risk in the room with Sarkhan the Serpentspeaker, as there are a lot of enemies, and they are equally split between magic, melee, and ranged.

That being said, you will struggle to make much of a dent in the dungeon unless you have stats above 80, and your gear is t70 or above. As always, the higher the better. It should be noted that all tier 92 armour items do not degrade in elite dungeons, so they are an excellent choice for the dungeon.

For range, the best performance may be acquired by spamming Decimation special attack to kill large numbers of minions very quickly, as abilities like Corruption shot and Fragmentation shot will spread along near NPCs. Use of Soulsplit is recommended during this huge AoE damage.

It is highly recommended, if using magic, to have the ability Corruption blast. For Range, it is highly recommended to have the ability Corruption shot . These abilities have a bleed effect that spreads to adjacent enemies from the enemy that is initially inflicted with the ability. If you have a mage and a ranger on your team with these abilities used together, large mobs of enemies will die very quickly, allowing you to get to the minibosses faster.

It is highly recommended to token farm in a group of 3. Farming in a duo or solo is still possible, but tokens are obtained much more slowly. This can be done from the Grouping system, choosing Temple of Aminishi as the option. Once the group is set for Temple of Aminishi, all player click the ready button to "Ready-up." This then gives the group leader the option to teleport all members of the group to the entrance of the Temple of Aminishi.

It isn't worth it to enter the dungeon if there are less than 2 minibosses, especially if the bosses are surrounded by many mobs. For this reason, it's helpful/necessary to "scout" the floor before the rest of the group enters. The leader of the group is the only one who can create a new dungeon instance, so they will be the one scouting. To scout, it's recommended that you not be in Legacy mode, since you need to expand the minimap. As soon as the scouter enters the dungeon, they expand their minimap so that they can see all of the potential miniboss spawns. There are 5 potential minibosses on the first floor, and there will be anywhere from 0-4 that spawn. 2 or 1 are common, 3 is rare, and 4 is very rare. You have a better chance of having more minibosses on the first floor when the Temple of Aminishi is spotlighted. In addition, during the spotlight for the Temple of Aminishi, one additional miniboss will spawn, making it possible, although very rare, for all 5 minibosses to spawn on the first floor.

As mentioned before, there are five possible minibosses on the first floor, and one additional one right before the first boss. The following is a map of the potential locations for each of the six potential minibosses. 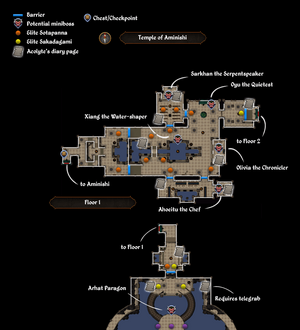 Map of the minibosses of the first and second floors

Xiang the Water-shaper is a very desirable miniboss, and can be fought without having to deal with many of the temple's inhabitants.

Sarkhan the Serpentspeaker himself is pretty easy to defeat, but he is surrounded by a large number of Elite Sotapanna using all three sides of the combat triangle. If you are unprepared, the damage received from the multiple combat styles in this room can kill you in a matter of seconds.

One possible way of dealing with the enemies in the chapel is to lure them out, by having a member of the group run (or surge) in the chapel to the altar, and back out again. This way, they can be dealt with one at a time, or in smaller groups.

Oyu the Quietest is the least desirable to fight. He hits, by far, the hardest of any of the minibosses you will encounter in the dungeon. Without Protect from Magic or Deflect Magic, he can often do more than enough damage to one-hit you (upwards of 8-9k damage in a single hit). If Oyu is targeting you in the group, it is recommended to keep your health high, use protection prayers, and use your defensive abilities frequently to lessen the damage.

Olivia the Chronicler is another easy miniboss to defeat. However, there are a large number of melee Elite Sotapanna to the north of her, and it is very easy to trigger aggression on those enemies. To not trigger aggression on those enemies, you need to hug the walls leading up the middle before you enter the raised dais with Olivia. As an alternative, this group of enemies is a very easy mob to dispatch with AOE abilities, and they are all melee users, so they will be very easy to defeat. Once again, it is highly recommended to use Corruption blast or Corruption shot, as the bleed damage from those abilities will reach all of the many Elite Sotapannas, allowing easy healing with the use of Soul Split, and faster kills. An ideal location to defeat these enemies is in the corner between their spawn and the dais with Olivia. If you stand in the corner, only two of them can damage you, but you will be able to hit all or many of them at once.

Ahoeitu the Chef is a straightforward and easy boss. He is somewhat out of the way compared to the other bosses, but there are no large masses of enemies near him, so it is easy to get to him and face him without distractions.

Arhat Paragon is an optional miniboss. To access the Arhat Paragon, you need to defeat the three Elite Sakadagami guarding the barrier and entrance to the second floor in the north-east corner. At that point, some or all of the group can run down to scout if the miniboss is present. This miniboss is a bit stronger than many of the minibosses on the first floor, and you have to fight through a handful of Elite Sakadagamis, which are stronger than the other mobs on the first floor. Because of this, you shouldn't scout for him unless Oyu is spawned, since that puts you in close proximity to the entrance to the second floor. Also, if you are fighting with melee, you will be unable to reach him without fighting many other Arhats and Anagamis which may remain out of reach, which is not desirable for fast runs. For this reason, this miniboss is commonly skipped.

Some Elite Sotapanna are wearing Seiryu facemasks. These are healers, and they have the one-time ability to heal an ally when they fall below 50% health (including themselves). This will heal the ally by a substantial amount. If this healing is triggered on a miniboss, an uber heal will trigger, and the miniboss will be healed close to full health. For this reason, the healers should be killed quickly, and there should be none in close proximity when fighting minibosses.

The majority of the minibosses in the dungeon are on the north side of dungeon, so it is recommended to take the left path at the bottom of the stairs at the entrance. The enemies at the first barrier on the left path are easier to beat than those on the right path. You should only take the south (right) path if there are only two bosses, and they are Olivia and Ahoeitu the Chef. Otherwise, it is more efficient, and there will be less unnecessary enemies to defeat if you go left (North).

For many of the enemies, attacking only a few of them at a time is preferable. However, in one notable exception (the melee Sotapanna between Olivia and Oyu), it is preferable to attack them all at once. It is discouraged to attack all the enemies in the chapel with Sarkhan the Serpentspeaker if you are weaker, or if you don't have an effective tank. For weaker groups, the enemies should be lured out (by standing next to the north wall near the entrance to the chapel). With bleed abilities like the two Corruption abilities, it is possible to take minimal damage, but still kill them reasonably quickly. If you are stronger, it is recommended to run in the chapel, immediately turn left, and then run to the north-west corner, so that only a few can attack at once. If you are strong, you can also run through them, ignoring them, and go straight to the boss. Many of them will get stuck behind the altar, and be unable to attack you. This is very risky, however. One wrong step, and five or more of them will be able to hit you at the same time, potentially killing you immediately.

If you complete the quest Curse of the Black Stone (requiring you to beat all of the three elite dungeons, can be done in story mode), you get a permanent 10% damage reduction from all enemies in all elite dungeons. This will be very helpful, so completing that quest is highly recommended.

There are several ways to try to reduce the damage taken. Prayers are a must. Protecting from the styles will save you a lot of the time. Defensive abilities are also a great idea.

Another tip is to hug the walls to avoid fighting unnecessary enemies. Often, hugging the walls won't be enough, and you will have to surge to avoid enemies.

If you have a group, you should all try to stand on the same square to do large amounts of AOE damage to the same enemies, killing them faster, while keeping your group alive.

If you have a bonecrusher on your toolbelt, you can often recoup all of the prayer drain from Soul Split and Torment/Anguish by wearing a Demon Horn Necklace (or a lower-level equivalent). It's up to you if you want to save on prayer potions, or have better stats. It might be worth it to bring both, and switch to the better amulet against miniboses, and use the other necklace on the easier-to-kill mobs.