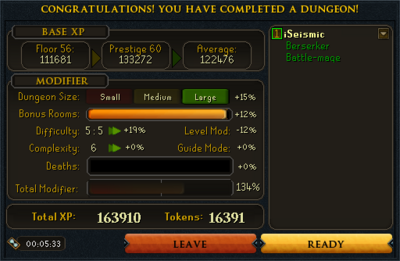 The WINterface indicates the experience earned at the end of a floor.

The music that plays

The winterface is a dialogue box displayed after players complete a floor while training the Dungeoneering skill. It indicates how much dungeoneering experience the player was rewarded, and gives some details about how this was calculated. This system also assigns titles to each team member depending on their actions during the dungeon.

The "floor XP" for completing a floor depends in a complicated way on the floor number, size, and difficulty. It is intended to be a measure of how much time the floor is expected to take to complete (but is not affected by the actual time taken).[1]

If a player hasn't completed the floor since last resetting, the "prestige XP" is computed in the same way, but using the player's prestige value in place of the floor number. If a player repeats a floor before resetting, prestige XP for a lower uncompleted floor of the theme is given. If no such floors exists, their prestige XP will be zero. The floor XP and prestige XP are averaged to give the base XP.

The following bonuses and penalties are then added to determine the total modifier:

Finally the total modifier is applied to the base XP to determine the final XP which is awarded to the player. The number of tokens awarded is one tenth of this (rounded down).

After each floor has been completed, titles are awarded to some of the players based on their contributions to the team. Better playing will lead to green titles, poor playing to red titles and neutral playing to yellow titles. These titles do not affect experience.

Titles include phrases such as M.V.P, Berserker, Nothing special, Sharpshooter, Master Chef, or Battle Mage.

The interface displays an animation showing how the various bonuses and penalties affect the amount of experience. This can be skipped by clicking the Skip button at the bottom right of the interface. Players will then be offered two options; Leave or Ready, when players may opt to immediately leave the dungeon or start the next dungeon. The next floor will start once all players have indicated their preference, or after 30 seconds. Players who have not made their choices beyond this point will start the next dungeon.