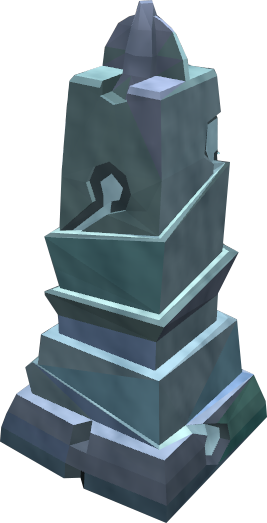 A summoning obelisk found in Daemonheim.

Summoning in Dungeoneering is different from Summoning in the rest of RuneScape. One notable difference is that standard Summoning includes familiars ranging from low to high levels for each of the charms. There are low-levelled blue charm familiars, such as spirit kalphites, and high-levelled gold charm familiars, such as arctic bears. In Daemonheim, however, all the lowest levelled Summoning familiars use gold charms, the next highest use green charms, the next highest use crimson, and then all the highest levelled familiars use blue charms.

To be able to summon familiars, players must be raiding a dungeon of complexity 5 or greater. The update on the 28 April 2010 removed the need to purchase shards and pouches. Charms and secondary components are all that is required to create Summoning pouches in Daemonheim.

There are 10 tiers of each type of familiar, they are:

All of the familiars have different time limits depending on their tier and the Summoning level of the player. All the secondary ingredients for the pouches relate to the category of the associated familiar.

Bloodragers are melee familiars and grant a melee defence bonus, equivalent to their tier level. The secondary ingredients for bloodrager pouches are ores, the basis of melee equipment. All bloodragers share the Sundering Strike special move.

Deathslingers are ranged familiars and grant a ranged defence bonus, equivalent to their tier level. The secondary ingredients for deathslinger pouches are branches, the basis of ranged weapons and ammunition. All deathslingers share the Poisonous Shot special move.

Stormbringers are magic familiars and grant a magic defence bonus, equivalent to their tier level. The secondary ingredients for stormbringer pouches are plants, from which magic armour is crafted. All stormbringers share the Snaring Wave special move.

Hoardstalkers are foragers and forage materials for making items. The number of spaces they have for storing foraged materials is equivalent to their tier level. The secondary ingredients for hoardstalker pouches are hides. All hoardstalkers share the Aptitude special move.

Worldbearers are beasts of burden and can carry varying numbers of items, based on their tier level. Tier one familiars have an inventory of 12 spaces, and each tier level above this has two more spaces, capping with 30 spaces at the sachem level.

The secondary ingredients for worldbearer pouches are bags, which are normally designed to hold items. All worldbearers share the Second wind special move and last for 60 minutes before disappearing.

Skinweavers are healer familiars and increase the player's healing from food. When a fish is eaten, 25 extra life points are added for each tier, up to 250 life points with a sachem skinweaver. These familiars do not restore life points over time like the bunyip, but instead provide instantaneous healing via their Glimmer of light special move (much like the unicorn stallion).

The secondary ingredients for skinweaver pouches are cooked fish. 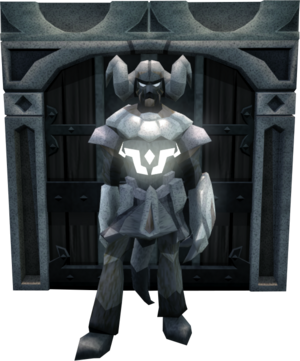 A Ramokee exile guarding a doorway.

Whilst exploring dungeons, a Ramokee exile may sometimes be found guarding a doorway. This "rogue" familiar will need to be dismissed in order to move on to the next room. The exiles may also be encountered in free-to-play dungeons.

Players may also encounter an enigmatic hoardstalker that requires a certain Summoning level to be understood. He asks the player a riddle which describes a particular item in his room. Players who do not meet the level requirement to understand the hoardstalker can still give him the correct item to unlock the door(s) in the room.

This information has been compiled as part of the update history project. Some updates may not be included - see here for how to help out!
Retrieved from ‘https://runescape.wiki/w/Dungeoneering/Summoning?oldid=35685276’
Categories:
Hidden category: