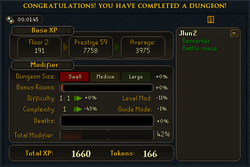 Floors are completed quickly but experience is low when rushing.

In order to maximise prestige, and thus increase Dungeoneering experience gained, players must tick off every single floor before resetting their progress. Players with higher Dungeoneering levels will have a large number of floors to tick off, however the level modifier leads to base experience for the lowest floors being roughly half that received for a player's highest floors.

Doing a floor "properly" in large, complexity 6, 5:5 mode can take over an hour, and the rate at which experience is gained will be reduced if the player only receives half of their maximum base experience. To get around this many players rush through lower floors in quick succession as fast as possible, disregarding the amount of experience they receive on these floors in order to tick off all floors as quickly as possible.

Party: A full team of five sharing tasks will progress fastest, as selecting the 5:1 option will mean the dungeon is still designed for one player; having more players also makes it easier to continue after some drop out. Following multiple drop outs, regrouping may be a good way to increase speed, but time spent recruiting a new party may offset this.

The party should be advertised as a C1 5:1 rush over many floors to avoid players misunderstanding the rush approach, holding up the raid, and then dropping out.

Solo: A single player can easily rush their lower floors on complexity 1, in only a little more time than a full party.

Floor: The leader should pick the lowest floor that they are yet to tick off, (gathering a group at level 1 is considerably easier), as the floor number will increase each round.

Other: A small dungeon on guide mode and 5:1, can be completed fastest.

Skip the Winterface immediately as it appears, do not wait for the animation to lapse. If any players are unaware of how to skip the Winterface to the next floor, their teammates should teach them as a 30 second delay between every floor will soon add up.

The whole approach should be geared completely to speed, not experience, as the aim is to tick the floor. Tactics include:

Tactics for other bosses include: