The Dungeoneering skill allows a player, or a team of players, to adventure through a series of rooms with the goal of defeating the Boss Room. The various rooms have numerous objects that may be used to assist in this goal.

The rooms are built from templates that expand or contract according to the complexity and party size. The rooms can be classified as the Entrance room, Puzzle rooms or the Boss rooms. 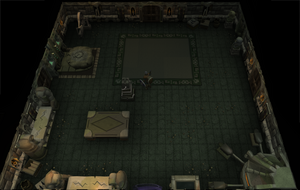 Say "Hello" to the Smuggler!

The Entrance Room is where every party enters the floor. The Smuggler is located here who sells most of the materials to make F2P items. Items used for exploring the floor are randomly generated and placed on the tables, such as weapons, tools, runes, etc. You will also see many of the stations needed for skills used on the floor. Depending on the level of complexity, you will see: a furnace with anvils, a spinning wheel, Runecrafting altar, a Summoning obelisk, a Divination energy rift, and a water trough. There is also an exit ladder that you can climb to exit the dungeon. Some doors in this room might have an obstacle to opening them.

In any dungeon, it is possible to find:

Each new room entered may have additional doors in it. it can be identified as one of the following:

Note: Only Guardian Doors require you to kill any monsters. So although you may be attacked as long as you are in the monsters proximity, you can still pick up keys, unlock or unblock doors (if any) and traverse through any doors no longer barred. Helpful if you want to wait to make potions or armour and weapons but don't want to risk your life points without them.

Guardian Doors are protected by randomly chosen monsters from a list according to the floor you are on. The list will likely be similarly grouped like the Boss Monsters. Bovimastyx monsters, which are nonaggressive, are not required to be killed to open a door of this type.

Objects related to skills and resources can be randomly found in any room of Dungeoneering.

Resources include as the following below. Note that some rooms may contain multiple resources in one room, and the resources can be the same. (e.g. two Corpsethorn trees, a Promethium rock and a Spiritbloom plant).

Spots used for increasing skills include the following as listed below. Note that some rooms may contain multiple spots.

If the room contains a puzzle, one or more doors will be locked until the puzzle is solved.

See Dungeoneering/Puzzles for help on completing them.

Note: Resources and skill spots that occur in a puzzle room may be used before solving the puzzle (if the puzzle remains inactive while doing so, usually by avoiding switched and pressure pads) but any monsters should be dealt with first, as they may create an obstacle for some puzzles.

The main goal of a floor is to defeat the boss. The completion exit doesn't open until the Boss Monster is defeated; exiting the dungeon in any other way results in a failed floor and will give you reduced experience (or none if you did not explore at least half of the dungeon).

Note: Before leaving the dungeon through the exit in this room, it is advised to explore as much of the dungeon as possible as this increases the experience you are rewarded with. You may not leave the boss room using the door if you are attacked, though you can teleport out using a gatestone, the exception being in the rooms of Luminescent Icefiend and Yk'Lagor the Thunderous (if not standing behind one of the pillars).

This information has been compiled as part of the update history project. Some updates may not be included - see here for how to help out!
Retrieved from ‘https://runescape.wiki/w/Dungeoneering/Rooms?oldid=35794167’
Category:
Hidden category: