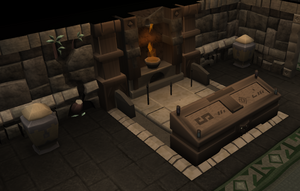 An altar found in Daemonheim.

Prayer is a skill that can be used in Daemonheim while Dungeoneering. Its main use remains the same as the usage of prayer outside Daemonheim, but certain Prayer levels are also required in some dungeons to be able to proceed.

A variety of monsters who dwell in the dungeons drop bones, big bones, bat bones, dragon bones or frost dragon bones. These can be buried or used at altar (explained below) in order to gain Prayer experience.

A door requiring prayer to be opened.

Members are able to get access to one new prayer in their prayer book, Rapid Renewal. Rapid Renewal requires 65 Prayer and restores life points at five times the normal rate.

Players using the Ancient Curses have no new curses available to them.

Some rooms in some floors have altars. Originally, they could not be used while under attack as using them raises a dialogue option, thus making it impossible to regenerate prayer points except at safe spot. On 6 October, 2010, an update allowed right-click prayer restore, making the altar usable even when players are under attack. The amount of prayer which you can restore depends on your prayer level and the size of the dungeon. You can restore prayer points equal to ten times your current Prayer level, or double the amount when raiding a medium dungeon or triple the amount when raiding a large dungeon. For example, in a medium dungeon, a player with 54 Prayer can recharge at most 1080 prayer points from any altar, and there is no limit on how many times it is recharged, but stored prayer points are shared between all the altars, once all supply is taken, all altars will stop responding to player's pray. On levelling up, the prayers in store in altars will be updated. For example, gaining one level will cause the maximum and current prayer point in store to increase by 30 in a large dungeon, immediately so that players can restore it as soon as they get a higher level.

With 75 Construction, players can build their own altar in the base with five bovistrangler branches and five zephyrium bars. To do this, right click on the portal in the start room, and press "Replace" - this action can be reversed.

Players can also restore their prayer points by consuming potions made through the Herblore skill.