Herblore in Daemonheim is only accessible to members who are doing complexity 5 or 6 floors. All Daemonheim potions are 1-dose only, and most boost multiple skills at once. Some obstacles require a potion-boosted skill level to pass them (e.g. "You need a mining level of 103 to mine this rock...."). For skill doors, Portents of passage can be used instead of potions. Players are able to bind one potion to a special potion slot and use it in upcoming dungeons, similar to other bound items. 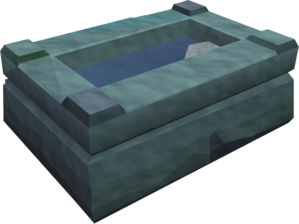 A water trough, found in Daemonheim. Vials can be used with these to fill them with water.

The highest level to which a player can boost to while using a potion for Ranged, Attack, Strength, Magic, and Defence is 116, while non-combat skills can only be boosted to level 110. Neither prayer nor summoning can be boosted at all. Players are able to make potions which require level 99 Herblore at level 89 by first making a naturalist's potion (boost to 96), then by making a strong naturalist's potion (boost to 100), then making the level 99 potion (strong survivalist's potion).

It should be noted that for all boosts the percentage is applied, then the flat amount, and then this number is rounded down to the nearest integer. The following calculator shows the boost outcome for each potion type.

The process of cleaning a herb is exactly the same as outside of Daemonheim: find a grimy herb and, if you have the Herblore level to clean it, simply click it or right-click it and select "Clean".

As with cleaning herbs, making potions in Daemonheim is very similar to making potions in the rest of RuneScape. You will need a cleaned herb, a secondary ingredient, and of course, a vial of water in which to make a potion. Vials can be bought from the smuggler, or received as occasional drops, and then filled with water from any of the frequent water points strewn around Daemonheim or by using the Lunar spell Humidify. The secondaries are void dust, misshapen claw, firebreath whiskey and red moss, and can either be bought from the Smuggler or can be received as occasional drops.

There are various potion types which are used for non-combat skills. These each affect several skills at once.

The herbs are divided into 3 groups, with each group making the same types of potions but in increased strengths. This may be useful in deciding what potions to produce from the available herbs.