From the RuneScape Wiki, the wiki for all things RuneScape
< Dungeoneering
Jump to navigation Jump to search
See also: Dungeoneering/Hard mode/Strategies

Hard mode is a Dungeoneering feature that was released 10 September 2013. It is only available for complexity 6 dungeons.

Players must have completed the elite Daemonheim achievements in order to gain access to hard mode. Players who have not unlocked hard mode may still take part in hard mode floors as long as the player who's hosting the party meets the requirements. Also have collected the rewards from Thok. 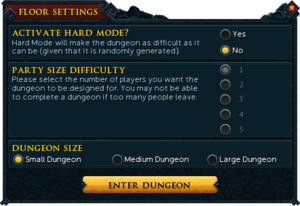 To start hard mode, select a floor and set the difficulty to complexity 6 via the ring of kinship or the ladder. Attempting to start a floor opens the Floor Settings interface, the top section of which contains a toggle for Hard Mode.

Several mechanics are altered when hard mode is enabled to make the floor as difficult as randomly possible. Players who wish to play on hard mode should expect the following:

For these reasons, the shadow silk hood should be bound as armour to avoid multiple enemies from attacking at once. Prayers should be used sparingly unless an altar room has been found and cleared, since it is typically not worth the time to make prayer potions. Players can also bring all three forms of combat if possible to maximise their accuracy against all potential opponents. A recommended setup includes any primal two-handed weapon for Quake, a celestial catalytic staff, and a hexhunter or sagittarian bow. A sachem bloodrager, deathslinger, or stormweaver familiar can help speed up kills. 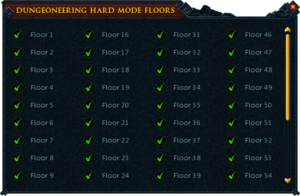 Checking with Thok what floors have been completed in hard mode

Hard mode's progression is different than normal mode, as there is no way to check which floors were completed with the ring of kinship. Players can only check which floors have been completed by speaking to Thok or right-clicking on him to open the interface without going through the dialogue. Players can also check the Hard as Daemons achievement in the Achievements interface. There is a message that appears at the end of each hard mode floor, however:

You have completed floor [number] on Hard Mode. Your lowest floor incomplete on hard mode is: [number].

You have completed floor 25 on Hard Mode. Your lowest floor incomplete on hard mode is: 2.

This means players can do three things:

Unlike normal mode, where a player is able to do any floor in a theme to check-off other floors of the same theme, hard mode goes floor-by-floor. For example you cannot do floor 1 twice in order to tick off floor 2.

Players are unable to reset their hard mode progress. Once a floor is completed in hard mode it is permanently ticked off for hard mode. If players need to reset their current progress it will only affect normal mode floors.

Hard mode floors may be redone; however, unlike normal floor progress, repeating a floor does not affect the progress of any other floors.

After completing all of the 60 floors of Daemonheim in hard mode, players are rewarded with a title: "[Name] of Daemonheim".