Firemaking is used in Dungeoneering to burn logs and to open skill doors found throughout the dungeons of Daemonheim. 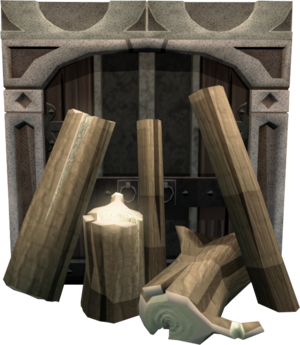 A door requiring firemaking to be opened.

Firemaking in Dungeoneering allows players to burn the flammable debris on certain doors that cannot be unlocked with the coloured shapes found throughout the dungeons. The greatest level required to open a door is level 105. All doors in the main path are unlockable by at least one player in the team. Failure to burn the debris on doors will cause the clothes of the player who attempts to burn instead, dealing a large amount of damage. If this damage kills you, you will receive the 'Spontaneous Combustion" award at the end. You can use an Artisan's potion to provide a temporary boost.

Below is a list of the types of wood you can burn while training Dungeoneering. The higher tier the wood the greater the chance of successfully cooking food on it.

Bonfires can also be made using branches (fires don't have a "use" option, but the left-click "craft" option on branches allow players to add them to a nearby fire), but higher level branches have an increased chance of failing, resulting in no logs lost nor damage dealt along with the message: "You burn your hand trying to tend the fire."

This information has been compiled as part of the update history project. Some updates may not be included - see here for how to help out!
Retrieved from ‘https://runescape.wiki/w/Dungeoneering/Firemaking?oldid=35685262’
Categories:
Hidden category: