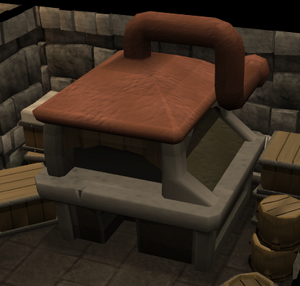 A range as found in Daemonheim

Cooking in Daemonheim is accessible to Free-to-play and Pay-to-play. Cooking can be increased with Naturalist's potions in the dungeons.

Much of the food found in the tunnels beneath Daemonheim is already cooked, but it is possible to catch fish from some of the dark pools within the structure, and, for this reason, it is useful to be able to prepare them using the Cooking skill.

To cook any of the items below, you will need to find or make an appropriate source of heat, either a fire or a range within your dungeon, depending on the food. Once a range is found, store it with branches and then light it using a tinderbox. Ranges will not last forever, unlike the ranges on the surface, although they seem to last much longer than ground fire, so you may need to periodically restock and re-light them. Branches can be gained by cutting the trees that jut from the walls of Daemonheim, or by buying them straight from the Smuggler.

Higher tier logs offer a lower burn rate. The range itself also greatly reduces the chance of burning fish. Higher tier logs in a range will give the best chance of not burning your fish. The burning rate of cooking range is about 1/10 compared to an open fire based on 1000 short-finned eel cooked on spinebeam branches fire; with 289 burnt of 1000 short-finned eel cooked on spinebeam branches, while only 27 burnt on a cooking range, which is significantly lower.

For members, making potatoes and filled potatoes can only be achieved on a complexity level of 5 or higher. To make a filled potato, use a Cave potato (obtained by planting Cave potato seeds in the farming patches around Daemonheim) on a range. Then use a mushroom or cooked fish on the potato. As noted below, up to two ingredients can be added to a cooked potato to make a foodstuff with a much greater ability to heal.

As all the ingredients are edible (with the exception of raw fish; mushrooms and potatoes can be eaten raw), remember to right-click when making filled potatoes.