At this stage, Construction in Daemonheim has six uses:

Construction can be increased by using an Artisan's potion in the dungeons. Using this potion, your Construction level will temporarily be increased so you can build things you normally wouldn't be able to at your level.

Players can use their Construction skill in a dungeon to build useful items in the start room. Each item has a level requirement and most also require five logs and five bars. Players need to have a hammer in their inventory or toolbelt in order to build at the hotspot. Boosts (such as Artisan's potion) can be used when building at the hotspot. When the dungeon starts, a Group gatestone portal is already built on the hotspot. To build something else, choose the right click option "replace." Whenever an item is replaced, the old item is destroyed, so if, for example a prayer altar is made, it is advised not to replace it, as the cost of making another is expensive. 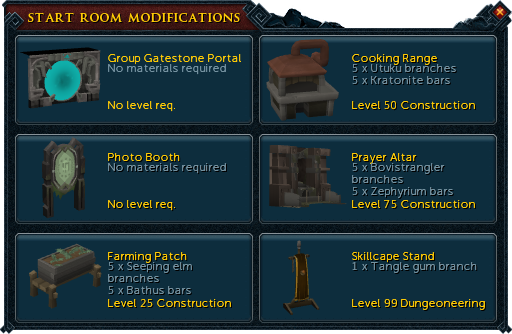