From the RuneScape Wiki, the wiki for all things RuneScape
< Dungeoneering(Redirected from Dungeoneering/Armour)
Jump to: navigation, search

There are 11 tiers of weapons and armours accessible in the Dungeoneering skill. Players are limited in their use of equipment by their combat skill levels but not their level in Dungeoneering.

Tier 11 equipment cannot be smithed or crafted by players; they can only be obtained as drops from bosses. Players may host "hunts", dungeons played with the intent of obtaining one of these drops. These have however decreased in popularity since the update that allowed players to solo medium sized dungeons, which heavily increased the chances of finding rare monsters and higher levelled bosses, meaning more rare items dropped.

As with all equipment outside of Daemonheim, you cannot boost any of your combat levels using potions to be able to wield any armour or weapons.

Daggers attack at the Fastest speed, quicker than any other weapon in Daemonheim. The other stabbing style weapons are the rapier and spear, both of which attack slower but have higher damage per hit.

Rapiers have Fast attack speed, which is slightly slower than daggers, but deal more damage in exchange. They can also be used with a shield to make use of the Tank class ring.

Longswords have Fast attack speed and the same statistics as rapiers, except that they are slashing style weapons instead of stabbing style. They can also be used with shields to utilise the Tank class ring.

Battleaxes have Average attack speed, but offer better damage than longswords. They have the same statistics as warhammers, but are slashing style weapons instead of crushing. Being one-handed, they can be used with a shield in order to utilise the Tank class ring.

Two-handed swords have Average attack speed and are as powerful as mauls, but they are slashing style weapons. Like mauls, they work well with the Berserker class ring. The main drawback to using two-handed swords is that shields cannot be used with them, preventing use of the Tank class ring. This can also pose a problem if a dragon is encountered, as two-handed swords cannot be used with anti-dragon shields. Instead players would be forced to use prayers or potions, which only provide partial protection.

Warhammers have Average attack speed, the same as battleaxes. The main difference is that warhammers are crushing style weapons. They can also be used with a shield in order to utilise the Tank class ring, or with an off-hand weapon for dual wielding capabilities.

Spears have Average attack speed, the same as the other two-handed weapons. Since they are two-handed, this prohibits the use of the Tank class ring, but allows use of the Berserker class ring. This can also pose a problem if a dragon is encountered, as they are unable to be used with anti-dragon shields, instead forcing the use of prayers or potions, which only provide partial protection.

Mauls have Average attacks speed, equally slow as two-handed swords. Like warhammers they are crushing style weapons. Their main drawback to using them is that they are two-handed, disallowing the use of a shield, which also prevents the use of the Tank class ring. This can also pose a problem if a dragon is encountered, as they are unable to be used with anti-dragon shields, instead forcing the use of prayers or potions, which only provide partial protection.

There are 11 tiers of Ranged armour that players may wear depending on their Ranged and Defence levels. Each tier set consists of a coif, chaps, vambraces, body, and boots.

There are 11 tiers of ranged weapons, each consisting of a longbow and a shortbow.

Shortbows have a higher damage bonus and are faster, but provide no armour or life point bonuses.

Longbows have a smaller damage bonus and are slower (with the exception of the Hexhunter bow which is even faster than shortbows). They provide a large amount of armour and life point bonuses.

There are 11 tiers of arrows that are dependent on the tier of metal.

Knives have the Fastest attack speed, making them essentially equivalent to thrown daggers. They can be dual wielded or used with a shield.

There are 11 tiers of Magic armour, each one consisting of a hood, robe top, bottom, gloves, boots, and shields.

All Magic weapons in Daemonheim provide an unlimited amount of all four elements simultaneously. The exception are elemental staves (see § Imbued staves below).

There are 10 tiers of unimbued staves. They can be fletched from wood or dropped by monsters. All unimbued staves will provide the energy to replace all four elements simultaneously. Staves can be imbued with catalytic properties.

Like staves, there are 10 tiers of unimbued wands. They can be fletched from wood or dropped by monsters. All unimbued wands provide the energy to replace all four elements simultaneously. Wands can be imbued with catalytic properties.

The catalytic and empowered catalytic wands can be created from an unimbued wand of the same or higher tier at a Runecrafting altar. All imbued wands provide the energy to replace all four elements simultaneously.

Orbs serve as the off-hand counter-part to wands. They are crafted from cloth, and have an attack speed of fastest. All orbs provide the energy to replace all four elements simultaneously. Orbs can be imbued with catalytic properties which are included in this table.

There are only 2 kinds of boxes and neither can be created by the player. They both have no stats and provide unlimited air runes. They are equipped in the ammunition slot and differ only by level requirement, obtainability, and appearance.

Like unimbued and catalytic staves, the doomcore staff provides all elemental runes when casting spells. It is unique in that it requires either level 83 Magic or both 68 Magic and 68 Attack in order to be wielded.

The following items can be obtained by defeating the various Slayer creatures found throughout each dungeon. A table list of these items and their respective stats can be found on the Dungeoneering Slayer page. 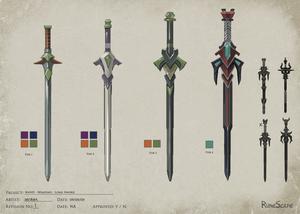