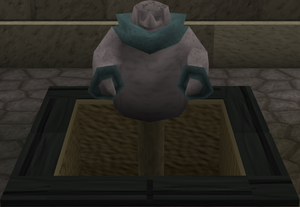 Dummies are sandbags which players could use to train on before the release of the Evolution of Combat, which made them non-interactive. Players could hit them for experience without the risk of taking any damage. They can be found in the building opposite Varrock east bank and the Combat Training Camp.

Using any style of combat on dummies would only give 5 attack experience per hit. Low level players could train on them until they reached an Attack level of 8. After this, if they attempted to hit the dummy again, they wouldn't be allowed to hit them and will receive the message "There is nothing more you can learn from hitting a dummy."

There are also dummies located in the Combat training camp north-west of East Ardougne, where players could also train. Biohazard must be completed to enter the camp.