From the RuneScape Wiki, the wiki for all things RuneScape
Jump to: navigation, search
The RuneScape Classic Wiki also has an article on: classicrsw:Duel 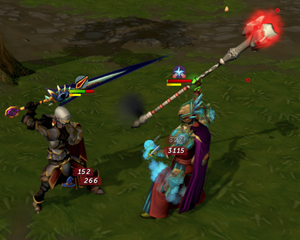 Two players duelling in Lumbridge.
For the enchanted ring, see Ring of duelling.
Not to be confused with Duel Arena.

Duelling is a feature re-released on 1 June 2016, allowing players to fight each other almost anywhere in RuneScape. No experience is earned from killing another player, nor are any items dropped upon death.

Players may challenge each other to a duel via a right-click option. Duel requests can be accepted by sending another request to the challenger or by clicking the request. The option to duel can be turned off through game settings or the trade filter.

The duel cannot be initiated if:

The duel ends if:

The disallowed actions in duelling are:

No Fighting in the Warforge! (

10) – Start a duel in the Crucible area within the Warforge.