From the RuneScape Wiki, the wiki for all things RuneScape
Jump to: navigation, search
The Old School RuneScape Wiki also has an article on: osrsw:Duckling
This article is about the attackable monster. For the NPC, see Ducklings. 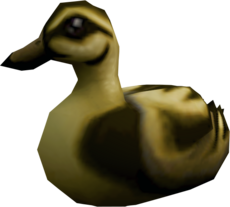 Ducklings are baby ducks found at the pond north of Lumbridge crater. They are usually found alongside other Ducklings, following their mother, and can be attacked with magic, ranged or a halberd. Since they are in the water, they do not drop anything.

Occasionally if you attack them without killing them, they would instead attack a duck, which would then retaliate, initiating combat until one of them dies.