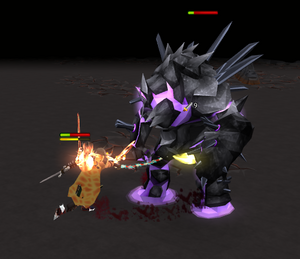 Like two-handed weapons, dual wielding provides 150% the damage of a sole main-hand weapon, but the user lacks the defensive stats and abilities granted by a shield. Main and off-hand weapons' hit chance is determined separately for auto-attacks, but with abilities only the main-hand contributes to accuracy.

Players may interchange which weapons they dual wield, even if the weapons are not of the same combat class: for example, one may wield an abyssal whip with an off-hand rune crossbow. When doing this, only abilities pertaining to the main-hand combat class will be available.

Some abilities require dual wielded weapons to use.

In the case of Magic, in order to deal full damage while dual wielding, not only do both main hand and off hand need to have magic weapons, they both also need to be individually set to autocast a spell (which could be two different spells).