From the RuneScape Wiki, the wiki for all things RuneScape
Jump to navigation Jump to search
The Old School RuneScape Wiki also has an article on: osrsw:Druid pouch
Druid pouch? (edit)

The druid pouch is an item obtainable during the Nature Spirit quest. After the completion of the quest, an empty Druid pouch spawns inside the grotto containing the altar of nature. Its main use is to make Ghasts visible, that haunt the Mort Myre Swamp.

It is a useful item in Temple Trekking as ghasts may attack the player or the follower during the trek between Paterdomus and Burgh de Rott. One of the rewards of this minigame is the Ouroboros pouch, which is essentially a druid pouch with an infinite number of charges. 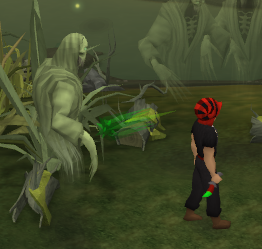 With a druid pouch, Ghasts become visible and attackable

This item is obtained during the Nature Spirit quest, given to the player by Filliman Tarlock, to complete a task for which this item is purposed. An empty Druid pouch spawns inside the Nature Grotto, located on an island at the southern end of Mort Myre Swamp. Cross the bridge onto the island (which is marked with a

). Right click the Grotto Tree where there is a tunnel and select "Enter Grotto".

To use the pouch, a player must first charge it with Mort Myre Swamp fruit (Mort Myre fungi, Mort myre stems, and Mort myre pears).

To obtain these items:

If a player has at least three Mort Myre Swamp fruit in their inventory, they may click on the Druid pouch to charge it. The fruit will disappear, and a number of charges will be added to the Druid pouch, based on the type of fruit.

Once charged, the Druid pouch may be used to make Ghasts visible in two ways: This information has been compiled as part of the update history project. Some updates may not be included - see here for how to help out!
Retrieved from ‘https://runescape.wiki/w/Druid_pouch?oldid=35694940’
Categories:
Hidden categories: