Druids are largely pacifist followers of Guthix. They are a peaceful organisation with a love of nature, notable for their expertise in Summoning, Herblore, and potion-making. They are usually seen wearing clothes that are green, white, or brown and sometimes have sickles and herb pouches hanging on their robes. Certain druids, such as Kaqemeex, are recognised as "high druids",[1] but druids do not actually have a formal leader or hierarchy; they are all considered equal in the eyes of Guthix. Instead, they rule by consensus, and any order issued by someone like Kaqemeex will only be followed if they agree to it.[2] They own a stone circle for the worship of Guthix in their village of Taverley, and they once had one south of Varrock but it was overrun by dark wizards wishing to summon Delrith, who have long-since defiled it. A group of druids is sometimes referred to as a coven.[3]

Druids represent one of the oldest religious traditions on Gielinor, with roots stretching back to the First Age. They descend from the first followers of Guthix, who approached the god directly to discuss his philosophy.[4] They were also some of the earliest masters of magic. Discovering runestones granted by Guthix, druids became known as the first wizards. [5]

in the First Age, many of the humans Guthix had brought with him to Gielinor began to inquire him about his philosophy. Even though Guthix disavowed worship, he allowed them to approach him and they participated in rigorous debate. This group of people became the first druids.[4] After Guthix granted runestones to the mortal races, some began to group spells together in spellbooks and the druids started wearing robes and pointy hats, becoming known as wizards.[5] Notable druids from this period include Snix and Snax, favourites of Guthix himself,[4] and Misalionar.

Following the destruction of Forinthry in the Third Age, the druids Ria, Atrew, Rief and Thera performed a ritual to untether Guthix from the anima mundi and wake him,[6] precipitating the end of the God Wars and the banishment of the other gods. Those same druids would join Aeternam in becoming the Balance Elemental, guardian of the Stone of Jas.[7]

In the first two centuries of the 4th age, the druids constructed Stone Circles across Gielinor.[8]

At some point, a druid named Urval was exiled from the druidic order and formed a splinter sect of druids known as chaos druids, who preach that Zamorak and Guthix are the same entity.

Although Guthix himself eschewed worship, modern druids have not necessarily always been aware of this or Guthix's true nature.

Traditionally, the druids have worshipped Guthix as an entity which both created and inhabits the world. He was viewed as existing within everything in nature and as vital to the continued balance of the world.[9] [10] Following the end of the God Wars, it was believed Guthix established a precarious religious balance for the world, and that if a second god wars were to erupt, he would remake the entire world in anger, wiping it clean of civilization.[9]

Since the assassination of Guthix, however, current members of the order of druids headed by Kaqemeex, based in Taverley, choose to honour, but not to worship, Guthix, and to spread his word and teaching of balance, harmony, and freedom from the gods in his absence. Although they are aware of Sliske's murder of Guthix, those who remain committed to the order have taken a vow not to seek revenge for Guthix's death. Some former druids who disagreed with this principle, such as Biehn, left the druidic order, with Kaqemeex's blessing.

The druids employ a Guthixian calendar dated from the year Guthix went to sleep after the God Wars. This calendar is particularly notable for being used as the basis for dating the "Fourth Age" period. Although to most humans, using the Asgarnian calendar forming the basis of the "Fifth Age" period, the year is 189, to the druids it would be the year 2,141 A.G.S (After Guthix Slept). [11]

Critics of the druids claim that they are too oblivious to the affairs of the wider world[12] and that their belief in balance makes them unwilling to act against evil.[13] However, many druids do choose to fight against injustice, and the druid Thaerisk Cemphier argues that if the balance of the world were at risk, the druids would defend it to their dying breath if necessary. Nevertheless, many of the older members of the order remain cautious.[12] In response, Thaerisk founded the Crux Eqal for druids wishing to take a more active role in defending the world. 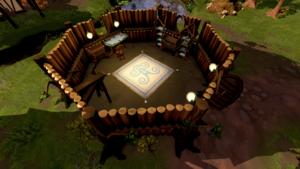 Their houses contain many natural things.