From the RuneScape Wiki, the wiki for all things RuneScape
Jump to navigation Jump to search
The Old School RuneScape Wiki also has an article on: osrsw:Drops
This article is about the items that monsters drop when they die. For the function that allows players to remove items from their inventories, see Drop.
"Loot" redirects here. For the friends chat feature, see LootShare.

Remains (drops) of an iron dragon.

Drops, also known as Loot, are the items that monsters leave behind for the player that killed them when they die, or when they are defeated. These items may then be picked up by players. Drops often include bones, coins, or other items. Most monsters have "100%-chance drops", which is an item or items that are always dropped by that monster upon defeat or death. 100%-chance drops are most commonly bones or demonic ashes. Certain monsters may have more than one type of 100%-chance drops, however; a common example of this are metal dragons, who drop dragon bones as well as metal salvage corresponding to their composite metal.

Typically, the player who attacks the monster first will see the drop before other players, and the attacked NPC is marked with an asterisk (*) to denote such "ownership". This does not apply to specific monsters, however, such as bosses.

Large monsters (those that take up more than one square) will always drop their drops in the south-westernmost square. This also applies to any Ranged ammunition that falls to the ground when ranging those monsters.

When a monster dies, it will roll most of its drop tables to see if a player should obtain an item, and then which item they should obtain.

These are the items that a monster is guaranteed to drop when it dies. Items on this table are usually remains such as bones and ashes, but there is no strict limitation to what can appear on this drop table. While all items on this table have a drop chance of "Always", not every item with an "Always" drop chance is a 100% drop; i.e., some items, such as the First dragonkin journal, are guaranteed as a drop on the first kill, but are not obtainable afterwards. This distinction keeps one-off items from being classed here; such items are usually tertiary drops.

Secondary drops are another separate table also rolled alongside a main drop if the monster possesses one. This table is different from the main drop table and generally contains less rewarding items, and unless specified, cannot roll unique items. Examples of monsters with secondary drop tables include the elite dungeon bosses and Solak.

Universal drops are a class of items that can be obtained by nearly every monster. Usually, this drops table only includes the Key token; however, promotional items can be added during Treasure Hunter promotions. Drops on this table usually follow a time release mechanic; e.g. if a key token was obtained as a drop, it will not be possible to obtain another key token for several minutes. This time gate is universal as well, being closed by, for example, skilling and obtaining a key token. Drops on this table may or may not be added directly to a player's inventory/bank.

All items have a chance of being dropped that is expressible as a number, their drop rate. Drop rates are not necessarily a guarantee; an item with a drop rate of "1 in 5" does not equate to "This item will be dropped after 5 kills." While each kill does nothing to increase the drop rate itself, it is trivial to state that more kills gives rise to more chance overall.

Given a known value of

, the chance of receiving such an item

The probability of receiving an item

kills with a drop rate of

For finding the probability of obtaining an item at least once, rather than a specified number of times, we can drop the binomial coefficient and simplify the equation to:

is calculating the probability of not receiving the item, and we use that to calculate the inverse.

For example, it is known that the drop rate of the abyssal whip is

. If we want to know the probability of receiving at least one abyssal whip in a task of 234 demons, we would plug into the equation:

Giving us the answer, we have approximately a 20.45% chance of receiving an abyssal whip during this task. See Drop Rate Calculator for the drop rate calculator.

There are two basic types of monsters: taggable and untaggable. Taggable monsters will give their drops to the first player who attacked it. Most untaggable monsters will give their drops to the player who dealt the most damage. Some monsters, such as Vorago, have unique mechanics that distribute the drops with a more complex algorithm, yet others, such as Araxxi and the Raids bosses, are looted with a coffer system, giving drops to all players who participated independently. For Ironman and Hardcore ironman mode, players must deal the most damage on the monster to receive the drop, even if they tagged it first.

The loot tab is a way to quickly pickup a stack of items in one go. Items that are dropped by the player, or appears for the player will appear in this interface. Certain items however, such as Pet droppings can also appear on the interface despite not being dropped by the player. The most valuable items based on Grand Exchange price will appear at the top of the interface followed by lesser valued items. Untradeables follow their own assigned value that can be found using the Wealth evaluator. 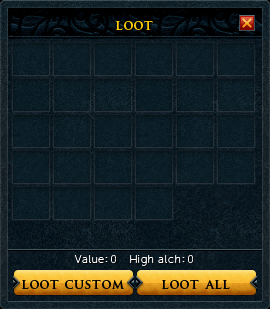 The loot tab for quick pickups. 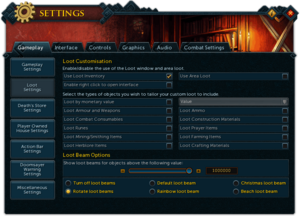 This picks up all items around the player in a 7x7 grid (a three-tile radius around the player). Having the Lorehound pet active with 125 reward points spent in the Pet track increases this to 9x9 (four-tile radius). Since this has the chance of exceeding the space for the loot tab, players wishing to pick up drops in areas filled with junk should either customise what to pickup or disable area looting/loot tab. You can also open Area Loot from the Loot section of RuneMetrics without needing to click on items on the floor, or simply assign it to a key under your keybinds.

Area loot can be toggled on or off in Settings under Gameplay > Item Drops. Members can also set a loot filter to only pick up certain types of drops with the custom loot keybind.

Cursed energy does not appear in the area loot interface as an anti-luring measure.

There are certain areas where the loot tab will not open even if enabled. The following areas have the loot interface disabled:

While the loot interface is active:

Since an update on 19 November 2013, valuable and various other rare drops will be highlighted by a beam of light when they're dropped. These beams will only shine for a short amount of time, however. If multiple items drop with each other to set off a loot beam, the displayed loot beam size will correspond to the highest-valued item within the dropped item stack.

Drops with a Grand Exchange value (total value of given drops, not counting 100%-chance drops) of 1,000–1,000,000 coins or more may be given a loot beam. A player may select the minimum Grand Exchange value of an item at which a loot beam is deployed, within the aforementioned threshold, by going into the Settings under Gameplay under Loot Settings. If the player does not select a minimum value, it will default to 500,000 until changed.

This information has been compiled as part of the update history project. Some updates may not be included - see here for how to help out!
Retrieved from ‘https://runescape.wiki/w/Drops?oldid=35748446’
Categories:
Hidden category: