Dream Mentor is a Fremennik quest that takes place on Lunar Isle. It involves helping the adventurer Cyrisus literally overcome his fears and doubts of combat using oneiromancy.

RuneScape is not the safest place to live - dragons, trolls, demons... dangerous and despicable monsters of all sorts roam free.

In this quest, you must help a fellow adventurer that doesn't do so well against these threats. With perseverence[sic] and the magical help of the Moon Clan, there should be no monster that can't be beaten.

But is that really true? How about the monsters in your dreams? How about your own inescapable fears? How would you defeat them?

Well, you'll soon find out as a tough and often bizarre quest awaits those of a strong will!

To start the quest, travel to Lunar Isle by either using the lodestone, teleporting with the seal of passage or by travelling to Pirates' Cove via Lokar Searunner at Rellekka and onward to the island. 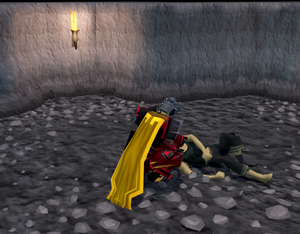 Head to the north-eastern part of the isle, where the entrance to the Lunar Isle mine is, and climb down the ladder. Head south-east to the small cave entrance by some ice chunks, north of the large essence stone.

Crawl through the cave entrance and you will find a fallen man. Upon inspection, you will be asked if you want to help him. Accept and a short cutscene will play, showing that the man is in very poor condition - weak breathing, ragged clothing and various cuts and bruises. He will need to be rejuvenated before the man will talk to you. 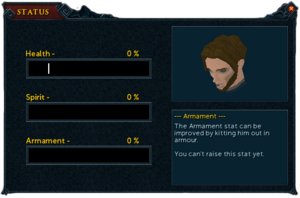 Cyrisus's Health, Spirit, and Armament stats. He is not doing well.

The man will require 7 pieces of varying food before he is fully recovered.

Feed four pieces of food to the man, rotating amongst the kinds of food you brought, as he gets bored without any variety. Be careful not to eat the food yourself and make sure to not use sacks of food on him, as they only count as one each.

Raise his spirit by saying encouraging words to him: It is all based on trial and error, but try to choose the most positive options. There are no dire consequences if you get it wrong.

He is now healthy enough to stand up and speak coherently. Speak with him to cheer him up, and he'll tell you that his name is Cyrisus and explain how he got himself in the cave. Feed him six more pieces of food, and speak with him some more. He finally asks you to go to the bank and bring him his armour.

Return to the upper surface and talk to 'Bird's-Eye' Jack, one of the bankers back in town; select the "Cyrisus in the mine" option. After a heated conversation — rehashing the first time you and the pirate-banker met — ask him if you can get some items out of Cyrisus's bank account. Jack gives you a chest to carry the armour, which includes a helmet, top, legs, boots, and a weapon. 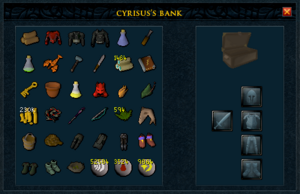 The contents of Cyrisus's bank.

The combination can be deducted through a process of elimination. Start with all items of one combat type and then check with Cyrisus to see what items are correct. The easiest way to do this is by using the NPC Contact spell to speak with Cyrisus. Speak with 'Bird's-Eye' Jack again and swap the items Cyrisus didn't like for the next combat type, and repeat a third time if necessary.

Cyrisus' armour selection is usually based on your highest level of combat (that is, amongst melee, ranged, or magic). Here are some common combinations:

When Cyrisus approves of your choices, go back to him in the cave and return the armour. You see a short cutscene, where Cyrisus modestly puts on his kit; his Armament status will now be at 100 percent.

If Cyrisus's Health and Spirit stats are still down, embolden him and feed him the last pieces of food to raise those to 100%. Another cutscene occurs, where Cyrisus finally feels healthy and says that he's "dressed like a war machine!".

Cyrisus tells you of his adventures and skills, such as having travelled to the frozen wastes of the deep Wilderness and being capable of planting spirit trees. Yet despite his skills, he has a fear of combat and actually came to see if the Moon Clan could help him. He plans to visit his dreams again and conquer his fears. He asks you to go talk to the Oneiromancer on Lunar Isle and says he'll meet you there shortly.

Outside on the isle, head south to the lower tip to find the Oneiromancer. She is near the Astral altar, so watch out for suqahs. Talk to the Oneiromancer and select the "Cyrisus" option, and Cyrisus arrives near you. The Oneiromancer says that with a certain Potion of Shared Dreaming, you and Cyrisus can travel to Dreamland and help him overcome his apprehensions.

The Oneiromancer gives you an empty dream vial to store the potion in, while Cyrisus teleports away, asking you to meet up at the ceremonial brazier. The potion requires goutweed and an astral rune.

To make the potion, first fill the dream vial with water. There are a few water sources west and south-west of the bank. Next, use the goutweed on the vial; it is now called Dream vial (herb). Finally, add the ground rune to the vial to get a dream potion. 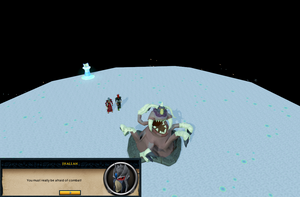 What on RuneScape is that?!

Bank and prepare for four fights. Remember, you cannot bank between fights, therefore if you leave the Dreamworld you will need to start over at the beginning.

Do not bring anything that you cannot afford to lose on death. A ring of life will not activate during the fights and you cannot bring familiars with you inside the Dreamland; boosted stats are retained after entering the Dreamland. 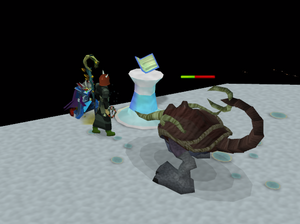 Using the safe spot on the west side of the lectern to fight The Everlasting.

During the fight, a bar will appear at the top of the screen, showing Cyrisus' courage. It fills up as you constantly damage the monsters. As it rises, Cyrisus will occasionally cast vengeance other on you, and when the bar is full, Cyrisus will himself deal some damage to the monsters.

If you die, your gravestone will come up near Cyrisus. Have an enchanted lyre or runes for Moonclan teleport ready in case you die for a quick way to get back to Lunar Isle. Alternatively, home teleport to an activated Lunar Isle lodestone may be utilised.

Head over to the west side of the town, into the building that has the ceremonial brazier and meet up with Cyrisus. Light the brazier, talk to Cyrisus, and proceed into his dream.

You see a short cutscene, where while you gape at the huge creature that symbolises Cyrisus's fear while he admires the lectern. Inadequacy is apparently the major cause of Cyrisus' insurmountable fear of combat.

Players with stats above 80 and similar level gear will not require food, just use the best gear you have. Bring a few pieces of food to be safe however.

The Inadequacy - Are you good enough to fight?

The first monster, a level 98 creature named The Inadequacy, summons many little creatures called A Doubt (level 77) during the battle to help attack you. The Inadequacy uses melee and ranged attacks and is immune to poison.

The Everlasting - Can you endure long enough?

The next entity is a level 93 creature called The Everlasting. It attacks relatively slower and less accurately than the Inadequacy.

There is a safe spot to the side of the lectern that will keep you from being hit if using range or magic. Although using this is an advantage, it may backfire with one ill-timed movement, causing the Everlasting to trap you and force you to tank its high hits.

The Everlasting is a fairly easy boss to overcome, if you can hold your own for some time.

The Untouchable - Can you bring yourself to hurt another?

The third monster, The Untouchable, is easier still — at level 98. It uses a fairly slow melee attack, however has the highest melee accuracy of the four monsters. You can also safe-spot this monster by using the same place as you did for the Everlasting.

Another efficient way to kill it (if you run out of food, for example), is to use the hit-and-run tactic. Run a few squares away from it, strike, and run away again. Doing this will allow you to kill the monster without taking much damage. 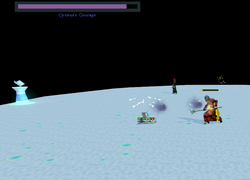 The Illusive - What if you don't know how to win?

The fourth monster, The Illusive - level 88, has the ability to dig into the ground regularly during the battle, similar to when you fight the Giant Mole, except that The Illusive does not burrow as far away. Its only attack is a relatively slow melee attack that rarely hits much, and it very rarely retaliates when attacked. Be patient, as you can only hit once or twice before it digs underground again.

A good strategy is to return to the middle of the platform, making it easier to spot its new location, as it pops up as a yellow dot on the minimap.

Cyrisus transfers some knowledge to the player.

After defeating the Illusive, Cyrisus, now brimming with bravery, stomps on it to finish it off and vanquishes his fear once and for all.

Back in reality, head back to the Oneiromancer and inform her of Cyrisus' victory. He suddenly teleports in and thanks you for your help by passing some of his knowledge onto you. 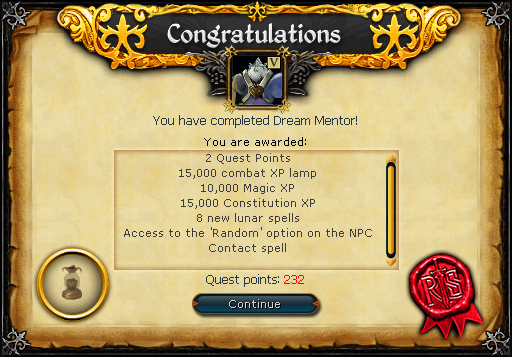 Dream Mentor is directly required for the following quests/miniquests: