From the RuneScape Wiki, the wiki for all things RuneScape
Jump to: navigation, search
The Old School RuneScape Wiki also has an article on: osrsw:Dragonstone armour
Not to be confused with Gemstone armour.

Dragonstone armour is a set of level 50 hybrid armour released on 11 June 2013. The five pieces of this set can be obtained as a reward from either Triskelion Treasures (unlocked using the Crystal triskelion) or as a very rare reward from the crystal chest. While Triskelion Treasures and crystal chest are for members only, the components of this set can be traded to and worn by free players as well. 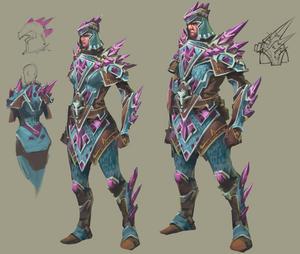