Dragonbane bolts are not obtainable until partial completion of the Ritual of the Mahjarrat grandmaster quest and are untradeable, although assistable.

Dragonbane bolts do not work on skeletal wyverns, as they are not classified as dragons. Ava's device will retrieve these bolts. 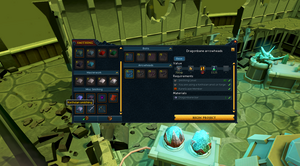 The Magic, Smithing, and Fletching requirements can be boosted or assisted. Therefore, using spicy stews and an extreme magic potion, the lowest levels possible to obtain these bolts are 76 Mining (required to complete the quest), 80 Magic, 74 Smithing and 74 Fletching.

In terms of damage, Dragonbane bolts are generally very effective. While the 25% ability damage bonus initially appears to make the bolts only count as 720 damage (compared to 864 damage for Ascension bolts), remember that the damage bonus applies to total ability damage and not just to the bolt.

The following is a damage comparison between:

Note that only really the first comparison matters, as the boosts provided by other conditions are fixed (i.e. the tier 70 set is +130 total damage (+87 main hand and +43 off-hand)), and these bonuses are further increased by using dragonbane as they benefit from the 25% boost (so the tier 70 set is worth +163 damage with dragonbane). Thus dragonbane with elite death lotus darts is just above tier 92 weapon damage. (This applies only with sufficient damage from your Ranged level - but the point at which the tier 92 damage is equal to dragonbane + EDLD damage is 81.6 Ranged, below the requirement to use tier 92 or EDLD to begin with.)

In Legacy Mode, dragonbane is even more effective as auto-attacks get a larger bonus than abilities, though one will have to use a two-handed weapon to really take advantage of this (a two-handed crossbow with bolts, or switch to dragonbane arrows instead. A dual-wielded dragonbane setup would also be viable - while the individual hits would be smaller, the overall damage output should be the same (i.e. don't use OHEDLD in legacy).

In terms of accuracy, as the bonus of dragonbane is a direct addition to hit chance, it is very effective and can usually make hit chance 100% with only modest other bonuses even for compartively lower level weapons (e.g. even the Armadyl crossbow can reach 100% accuracy with just overload, anguish, a full slayer helmet, and 99 Ranged against runes and hydrix dragons).

The primary downsides of dragonbane are: