From the RuneScape Wiki, the wiki for all things RuneScape
(Redirected from Dragon armour)
Jump to: navigation, search
The Old School RuneScape Wiki also has an article on: osrsw:Dragon equipment
This article is about the tier 60 non-degradable equipment available to pay-to-play players. For the free-to-play, degradeable version, see Corrupt dragon equipment. 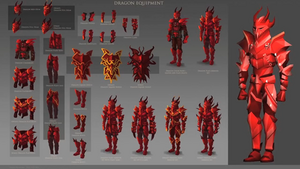 Dragon weapons are weapons requiring level 60 Attack to wield (or level 60 Ranged for several existing ranged weapons or 60 Magic for battlestaves respectively). Except for darts, arrows and crossbows, they cannot be created by players, and are generally obtained as drops from various high-levelled monsters, though some can be bought from specific stores (and of course from the Grand Exchange or from other players). Most offer access to a Special attack, except for darts and every weapon released after the Evolution of Combat. Many require the completion of a specific quest to be wielded.

Daggers, claws, longswords, maces and scimitars can be upgraded to a superior tier 70 version using a Wilderness hilt.

Dragon armour is tier 60 power armour, requiring level 60 Defence (and, in many cases, a quest) to wear. It is seen by many players as the next step up from the tier 50 rune armour, although tier 55 granite armour offers defensive bonuses between the two despite not being a metal and consisting of only six items.

These items are obtained by using a dragon ornament kit (sp) on a normal dragon armour piece.

These items are obtained by using a dragon ornament kit (or) on a normal dragon armour piece.

These are a free-to-play version of the dragon armour. It is the strongest armour available in free-to-play, but it crumbles to dust after 30 minutes of wearing.

The lucky dragon equipment is an item that was won on the Squeal of Fortune but is now discontinued.