Dragon Slayer is a quest that features the player trying to slay the dragon Elvarg on Crandor. It is often described as one of the most difficult quests that a free-to-play player can do and was the last quest to be added to RuneScape before membership was introduced to the game. 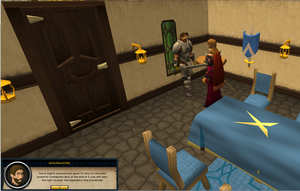 The Guildmaster offers you the quest.

To start the quest, speak to the Guildmaster in the Champions' Guild, located just below the southern entrance of Varrock. After talking to him, you will be directed to Oziach, located in a tiny house situated north of the Edgeville lodestone.

Oziach says that, to be able to purchase a rune platebody from him, you will have to slay Elvarg, the mighty female dragon, residing within Crandor Isle. He will tell you to re-visit the Guildmaster for information on how to kill Elvarg.

Travel to Lumbridge and speak to Duke Horacio on the 1st floor[UK]2nd floor[US] of Lumbridge Castle. Ask him about "a shield that will protect you from a dragon's breath", and when he asks you which dragon you're going to use it to fight against, tell him that you will be slaying the fearsome Elvarg of Crandor.

He will then give you an anti-dragon shield and tell you a bit more about the story of Elvarg and the fall of Crandor. 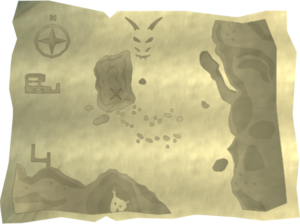 A complete view of the Crandor map

To reach the island of Crandor, you need to obtain a Crandor map. However, for the safety of the people of Asgarnia, the map was divided into equal pieces by 3 survivors – Melzar, Thalzar and Lozar – each of whom took and hid a map piece.

The map pieces can be obtained in any order. 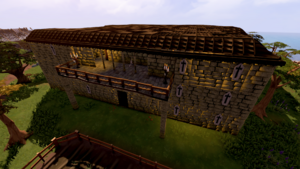 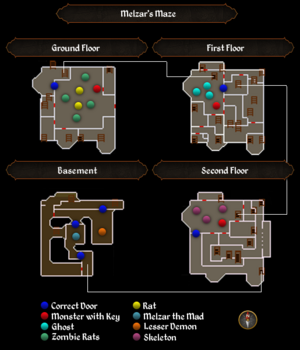 Melzar's map piece is found within Melzar's Maze, found south of the Crafting Guild and directly west of the Port Sarim lodestone. To progress through the maze, you will have to get past several locked doors, using keys obtained from the monsters. Barring the blue one, each key is held by a specific monster with a unique trait.

The entrance of the maze is a large room containing zombie rats. To get the red key, kill the small zombie rat with the long tail. Open the north-western door, and proceed up the ladder.

The second room contains ghosts. The orange key is dropped by a ghost with a cape, but not a hood. After obtaining the key, head through the middle door, second from the north on the eastern wall, and then climb the ladder.

The third room has skeletons in it. To obtain the yellow key, kill the skeleton with a round shield. Use the key on the south-western door and keep climbing down the ladders until you reach the basement.

The basement contains two zombies. Unlike the other rooms, there is no way to tell which zombie holds the key, so kill them until you receive one and then proceed through the blue door. 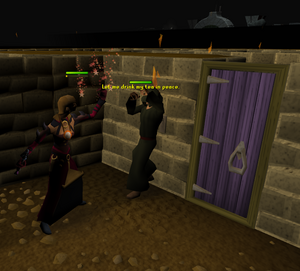 You must now fight Melzar the Mad. When killed, he drops the magenta key. Use this key on the magenta coloured door to progress to the final room. 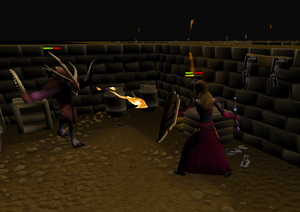 In the final room is a lesser demon who drops the final green key. It is weaker than other lesser demons, although it still uses magic attacks.

Once the demon is defeated, open the final green door and take the map piece from the chest by completing the dialogue. Either climb the ladder and exit the building through the entrance or teleport out.

Items needed: An unfired bowl, a Wizard's mind bomb, a lobster pot or a crayfish cage (tool belt does not work), and silk 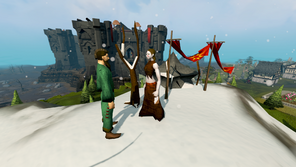 A player talking to the Oracle atop Ice Mountain.

Travel to the Ice Mountain, west of Edgeville and north of Falador, and climb to the northern-most part of the mountain and speak to the Oracle by her tent. She speaks in a riddle, which holds the answer to the location to one of the map pieces:

To obtain this piece of the map, you'll need:

The entrance to the Dwarven mines

Once you have obtained all these items, venture down into the Dwarven mines, just north-east of the Falador lodestone. The mine contains a room with a sealed entrance door in the north-east part of the mines, just north of the scorpions. When you've found it, use all the items on the Magical Door. Take care while using the wizard's mind bomb with the door, as the left-click action is to drink it.

Opening the magical door within the Dwarven mines

When you open the chest inside the room you get the following message, written by Thalzar:

Search the chest after reading the message in order to obtain the map piece.

Either head directly to Port Sarim Jail and confront Wormbrain or head to the Champions' Guild and speak to the Guildmaster.

Ask the Guildmaster about Lozar's map piece, who reveals that she had hid the map section in a safebox at her house in Lumbridge. Unfortunately, she was killed during a goblin raid, and the creatures looted everything from the homes. The Guildmaster suggests you speak to someone in the Goblin Village.

Speak to either General Bentnoze or General Wartface to learn that the final map piece is held by a goblin named Wormbrain, currently imprisoned in Port Sarim jail. Head there and speak to him. He'll confess to stealing the map from a frail old woman and getting caught while trying to escape. 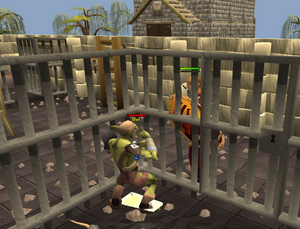 There are two ways to obtain this map piece:

After obtaining all the map pieces, simply use one of them on another to complete the Crandor map.

Items needed: Crandor map, 90 steel nails, 3 regular planks and 2,000 coins. You will need more nails and planks to repair the ship if you leave Crandor without killing Elvarg

Fixing the hole within the Lady Lumbridge.

The Guildmaster mentions a ship for sale at the Port Sarim docks, you must ask The Guildmaster before the captain will allow you to buy it. At the pier, talk to Klarense, the owner of the boat. He offers to sell his boat, the Lady Lumbridge, for 2,000 coins, which includes Cabin boy Jenkins. However, the ship is damaged and will require repair using 90 steel nails and 3 planks. Board the boat and complete the repairs.

Go to Draynor Village and talk to Ned, located in the house just north of Miss Schism. Bring your map and ask him to captain the ship and assist you in sailing to Crandor. He agrees and asks you to meet him on your ship in Port Sarim.

Here be a dragon![edit | edit source]

Items needed: Food, combat equipment and the anti-dragon shield, or antifire/super antifire potions if you are a member

When you are ready, board your ship and talk to Ned. Tell him you're ready to sail to Crandor Isle. A short cutscene will play, during which Elvarg flies over your ship in circles and sets it on fire. Cabin Boy Jenkins will panic before catching on fire and dying.

The ship will crash on the shore of Crandor. Make your way across the island to the peak, avoiding the progressively stronger monsters. Run past the lesser demons and enter the hole at the heart of the island.

Another cutscene plays, showing Elvarg's lair – full of charred bones, skeletons, and a wall outline of a former warrior that was burnt-down – before moving the camera angle to Elvarg, showing her as if she was slowly moving towards you.

Move past the skeletons until you see Elvarg behind a short wall of spikes protruding from the ground on the east. Further south, there is a passage that can be unlocked to provide a shortcut from Karamja in case you die or leave the fight early. If this passage is not unlocked, you will have to repair the Lady Lumbridge again.

Equip your anti-dragon shield and climb over the wall of spikes. 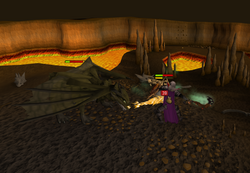 The player fighting against the fearsome Elvarg

There are no safespots in the cavern and Elvarg can hit up to 1500 life points worth of damage with her firebreath attack if an anti-dragon shield isn't equipped. On death, a grave will appear inside Elvarg's cave.

If your Prayer level is high enough, Protect from Magic and an anti-dragon shield will greatly reduce fire breath damage. Her dragonfire will drain your prayer points if you plan to use prayer during the fight, and not equipping an anti-dragon shield will drain your melee stats and prayer very swiftly until they are 1 and 0, respectively. Defensive abilities such as Anticipate and Reflect can help reduce incoming damage as well as damage Elvarg in return. The Revenge ability can be used to provide a small buff to your damage output.

Low level players should stick to Melee as Elvarg has the highest affinity for melee.

Should you be unable to defeat Elvarg or die, you may venture again to Crandor Island. The ship will return to Port Sarim in its original damaged state and needs to be repaired again with 90 steel nails and 3 planks. After doing so, talk to Ned on the ship to return to Crandor. Alternatively you can open the secret door within Elvarg's area during the fight to allow future access through the Karamja Volcano and complete the Cran Door's Secret achievement. 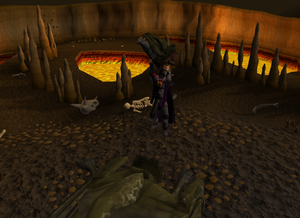 A player who has killed Elvarg.

Once you kill Elvarg, a cutscene will play during which you cut off Elvarg's head and stash it into your inventory. Leave Crandor and offer the head to Oziach, who will declare you a worthy member of the Champions' Guild and give you your reward.

If you lose the head, return to Oziach and the quest will end as normal. 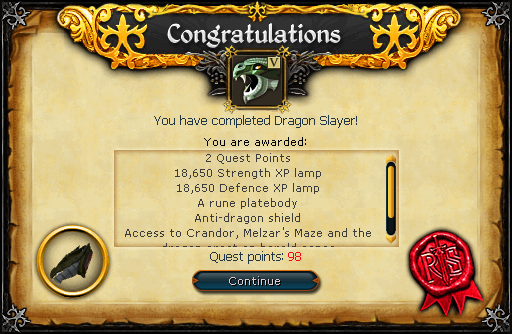 Dragon Slayer is directly required for the following quests/miniquests: