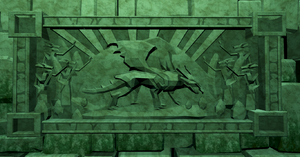 A mural in the Edimmu resource dungeon depicts the creation of Dragons.

A dragon (Draconis rex) is a dangerous race of monster with wings (though rarely seen flying) and the ability to use a fiery breath attack.

After being cursed by Jas to guard her most powerful artefact, a creed of Dragonkin known as the Dactyl wished to create a race that would be similar to them, but without suffering the Curse's effects. Kerapac created the first known dragon using his own blood and the egg of a large aquatic lizard. Phalaks soon created a similar, but weaker dragon. The two bred and created the dragons as we know them today.

Despite the Dactyls' efforts, the resulting dragons were seen as broken and bestial, deemed as failures. They would often be experimented on by their creators, either as a result of their own kind dwindling due to their inability to reproduce or supposed potential which resulted in various subspecies of dragons; metal dragons, gemstone dragons and even outliers such as frost and celestial dragons.

Dragons are often a very high combat level. Even the lowliest of dragons have a nasty dragon-breath attack. Only the adult dragons can breathe fire. As this attack can hit over 5000 life points, an Anti-dragon shield, Antifire potion, Super antifire or Dragonfire shield is almost always required to fight them. If both the shield and the potion are used, all of the damage is prevented. Due to the Protect from Magic Prayer's effectiveness against the dragonfire attacks (though less so that of the usual methods to repel them), dragons are at least partially magical in nature.

There are three non-attackable dragons:

Because of their artificial origins, dragons have no evolutionary lineage and share no identifiable common ancestor with other species.[1]

A dragon's habitat is usually either a damp cave or the site of an ancient battle.[2] Their diet mostly consists of meat, but they are also able to consume metals and reputedly consider runite a delicacy.[3] The natural lifespan of dragons is not known, as none have been observed dying of old age. Some have hypothesised that spontaneous combustion could be a natural cause of death for the species.[4]

Dragon culture is relatively unknown to other races, as they see them as a broken, bestial race, though they are capable of communicating with humans. The Stone of Jas is responsible for the dragons' rage, as the Dragonkin had used their blood in their creation. Dragons are capable of speaking and self-control, such as the King Black Dragon and Therragorn, although most have trouble doing so, requiring a conduit of some sort in order to speak with the other races. The dragons revere the Dragon Riders, due to the ability to remove their rage and grant them the life they can only dream of.

Dragons have a written language which is fairly simple but focuses on conveying emotions.[5] It is described as having a certain beauty to it in order to communicate lucid moments that occurred during the lifetime of a dragon. Non-dragons are capable of making use of it for other purposes such as coded messages.

Some dragons collect treasure. Rather than being collected out of greed, the treasures serve as mementos to remind the dragons of who they are without their pain and rage.[6]

A simulated Red dragon, found at an exhibit in the Varrock Museum

Dragon minibosses can only be found in the Dragonkin Laboratory.