From the RuneScape Wiki, the wiki for all things RuneScape
Jump to navigation Jump to search
"Tutorial dragon" redirects here. For the Dragon from the previous tutorial quest, see Dragon (Learning the Ropes). 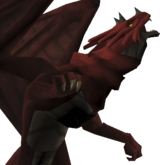 The Dragon was a dragon with an unspecified combat level that featured in the Unstable Foundations tutorial quest, which was how new players started the game. The Dragon was released with the quest in September 2009, along with the Objectives interface tab. The Dragon was one of only two red dragons accessible to free players, the other being Mr. Mordaut. Sir Vant mentioned that this dragon was owned by Roddeck. As revealed by Roddeck's Diary, it was a male dragon named Sottlepot. Apparently, he grew too big to be controlled, broke out of the shackles and reigned in Roddeck's basement.

During the tutorial, the dragon had an 'attack' option, though players would be stopped if they attempted this. To defeat it, the player had to place some drugged meat into the dragon's food bowl to make it fall asleep, and then collapse the cellar ceiling on top of it.

This dragon replaced the three-headed dragon from Learning the Ropes, and has since been removed as the associated tutorial has been replaced. Originally, accounts that were created before the release of the Unstable Foundations tutorial could still access the dungeon where Sir Vant and the dragon fought in Learning the Ropes and receive two experience lamps from him, whereas accounts that completed the Unstable Foundations tutorial could not access this dungeon as a message appeared saying that the ladder was destroyed. Since the removal of Unstable Foundations, this is no longer possible.

It is revealed in the Mega May event case Dragon Disaster that Sottlepot survived the ceiling collapse.

Mod Knox commenting on the dragon.

The dragon was the first one to use the new dragon graphical style, the second was ice dragon sculpture in the Land of Snow in the 2009 Christmas event. This new style was applied to all dragons along with the Love Story Update, except for pets and POH dragons.

This information has been compiled as part of the update history project. Some updates may not be included - see here for how to help out!
Retrieved from ‘https://runescape.wiki/w/Dragon_(Unstable_Foundations)?oldid=35766419’
Categories:
Hidden categories: