Dragith Nurn was a Fifth Age necromancer who lived in the Misthalanian town of Lumbridge. He features prominently in the backstory of The Blood Pact quest and can later be fought in an undead form. 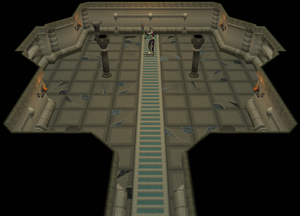 Dragith stands in his tomb.

Dragith was a researcher at the Wizards' Tower when he secretly began to study the Zamorakian magical branch of necromancy. In order to explore the art in greater depth, Dragith constructed a workshop beneath Lumbridge in which he experimented on both stolen corpses and local animals.

In 129, a young Lumbridge resident named Xenia discovered Dragith's secrets and managed to convince him to abandon his works in favour of a Saradominist lifestyle. Dragith oversaw the construction of the Lumbridge Catacombs to serve both a place to house the town's dead and a way to cover up his now-abandoned workshop.

During The Blood Pact, players work to foil a Zamorakian cult's efforts to re-open Dragith's workshop and unleash its inhabitants on Lumbridge. Upon completing the quest, players may enter Dragith's workshop, where they can fight his re-animated corpse as well as his minions in order to claim five pieces of his distinctive ritual mask.

If the player took the Diamond demon statuette or touched the plinth where the statuette rested, Dragith Nurn will become aggressive.

Dragith Nurn lived most of his life in the city of Lumbridge, although whether or not it was his birthplace is uncertain. He is known to have worked in the Wizards' Tower prior to its destruction in Year 70, placing his birth in the early Fifth Age. Details regarding his early life are largely unknown.

Dragith apparently took up work in the Wizards' Tower, where he studied runes and magic in great depth. At the time, Zamorakian wizards were permitted to use the Tower, meaning that Dragith had access to certain magical studies that would later be lost in the structure's destruction. Given that Dragith was apparently very respected in both the Tower and his hometown of Lumbridge, it is likely that he entered the tower as a Saradominist.

At some point, however, Dragith became fascinated with the largely Zamorakian art of necromancy, or the re-animation of dead bodies and spirits. Dragith, using both the resources of the Wizards' Tower and his own research, managed to uncover many of the art's secrets, keeping extensive notes concerning the subject, a handful of which would later survive the tower's destruction. Seeking to put his research into action, Dragith constructed a large underground workshop beneath the town of Lumbridge, near the local branch of the Church of Saradomin.

To supply his workshop, Dragith Nurn stole a vast number of corpses from the town's cemetery, which he re-animated and studied. He also is known to have used the corpses of local goblins at times, which he likely obtained from the woods outside the town. While most of the dead were re-animated on a purely physical level, Dragith also forced a number of spirits to return to the physical world, binding them into the form of a spider. In addition to necromancy, Dragith also experimented on local animal species such as cockroaches, bats, rats, and flies, usually in order to make them stronger or larger. Dragith, hoping to perpetuate his legacy, eventually went so far as to cast an irreversible spell on himself that would revive him upon his own death, albeit as a mindless corpse. During this and other rituals, he often wore a distinctive mask. 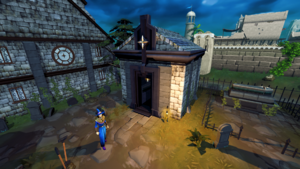 The entrance to the Lumbridge Catacombs, designed by Dragith

The destruction of the Wizards' Tower by Zamorakians in Year 70 did nothing to slow Dragith's progress. It was only in approximately Year 129 that Dragith's actions were discovered by a young Lumbridge girl named Xenia. Xenia, rather than reporting Dragith to the Wizards' Tower and the Lumbridge Guard, attempted to convince Dragith to abandon his research in favour of a Saradominist lifestyle. Eventually, Dragith decided to follow her advice, and approached the Lumbridge Church of Saradomin. He proposed the construction of a catacomb network beneath the church graveyard, in which the city's dead could be buried.

The Church embraced this, and under Dragith's supervision the catacombs were designed and built. Unbeknownst to the builders, however, Dragith secretly designed the catacombs so that they would cover the entrances to his workshop, the inhabitants of which he could no longer destroy due to their strength and numbers. Ultimately the catacombs were finished, and the only remaining connection between the two dungeons sealed by his magics so that only he could access the workshop. Knowing that he would ultimately be re-animated upon death, Dragith decided that, when he died, he would be interred in the now-abandoned workshop. In doing so, he hoped to prevent any damage that his corpse could inflict. Dragith eventually died in the workshop as intended, and his secrets were never uncovered by the town's populace. Xenia, excited by what she considered her first adventure, would go on to become a prominent explorer and eventually helped to establish the Champions' Guild.

Sometime after his death, Nomad entered Nurn's catacombs to find what secrets he held with necromancy to avoid death. A skeletal shell of his former self, he refused to reveal his secret but Nomad easily defeated him, however Nomad eventually left him alone when he realised that Nurn was a dead end, the latter's corpse held no different secret than any other.

The following takes place during The Blood Pact. 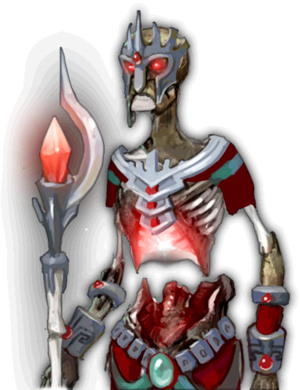 In Year 169, a young Wizards' Tower apprentice named Caitlin discovered the few remains of Dragith's notes, which had miraculously survived the Tower's burning 99 years before. She was recruited by a former Lumbridge church acolyte named Reese. Reese had managed to discover the Catacombs' true nature during his time with the Church, and together they decided that, if they could re-open Dragith's workshop, Lumbridge would be destroyed by the undead. They managed to recruit a third Zamorakian, an archer named Kayle, and together kidnapped a Wizards' Tower apprentice named Ilona, who they intended to sacrifice in order to re-open the workshop. 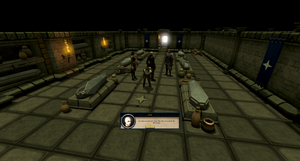 The cult's actions were noticed by Xenia, who was a now-retired explorer. Xenia managed to recruit an adventurer, whom she sent into the catacombs after them. The adventurer managed to kill or scatter the cult's members, but the death of the cult leader Reese near the workshop's entrance fulfilled the blood sacrifice necessary to re-open it. The group miscalculated the behaviour of the workshop's inhabitants, however, and they remained within it. The adventurer later went on to enter the ruined workshop and obtained the statues inside, which Xenia bought as mementos of her adventure. In the process the adventurer defeated Dragith Nurn's animated corpse, but found it able to reanimate if the plinth in his resting room is touched.

Drop rates estimated based on 110 kills from the Drop Log Project, unless otherwise cited.