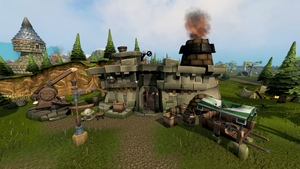 The Doric and Son smithy.

The Doric and Boric tasks are a series of miniquests which consist of tasks for both Doric and Boric which can be completed after the What's Mine is Yours quest, receiving Mining and Smithing experience and charges on the Gofannon amulet. After you complete each task, return to Doric or Boric for the next task. You cannot boost any of the requirements.

Most items smithed before having the relevant task cannot be used; the final items have to be smithed while on the task. However, you can prepare the + x items by making the + x minus 1 variant (e.g. make an iron full helm, get the first task, and then make it an iron full helm + 1). You can prepare Doric's Task IV by smithing all the + 2 items needed for the adamant burial armour set and finish the set when you are on the task.

The Gofannon amulet can be drained of its experience. Once drained, the player will receive double experience until the bonus experience is depleted.

Free-to-play players can start tasks by Boric and Doric. All of Boric's tasks and second half of Doric's tasks will require entry into members areas.

Completing the Doric and Boric tasks completes the achievement What's Mine is Also Doric's which is a requirement for both the completionist cape and the master quest cape.

The tasks were changed as part of the Mining and Smithing rework; for the tasks prior to the rework, see this article on 1 January 2019.

If all from scratch:

This information has been compiled as part of the update history project. Some updates may not be included - see here for how to help out!
Retrieved from ‘https://runescape.wiki/w/Doric_and_Boric_tasks?oldid=35792622’
Categories:
Hidden categories: