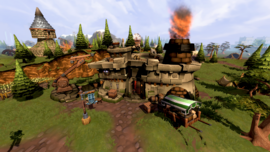 Doric's hut is a building located south of Goblin Village, near the gate to Taverley. It plays a key part in the quest What's Mine is Yours as well as a small, yet important, role in the quest Devious Minds. Doric the dwarf lives in the hut. There is a small wheat field next to Doric's hut, which will occasionally form a wheat circle and transport the player to Puro-Puro.

What's Mine is Yours can be started by talking to Doric This quest is useful for players who want to quickly level up Mining. After the quest, players can use the two anvils there.

Although access to Doric's anvils are granted by completing the quest What's Mine is Yours, it's recommended to use the ones in the Artisans' Workshop to earn respect.