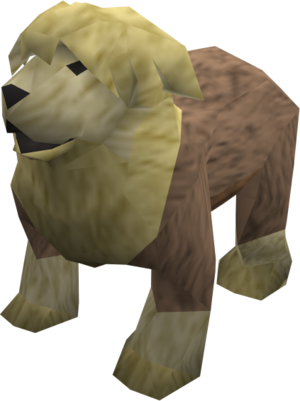 Dogs are a type of animal that were brought to Gielinor through the World Gate by Guthix during the First Age. They came alongside humans, who came from the same planet as they did. Dogs are commonly kept as pets by humans, either for companionship or work. Players are able to purchase pet dogs from the pet shops in Taverley and Yanille.

If players are doing the dog slayer task, it is recommended to slay Wild dogs at Brimhaven Dungeon, as their main spawn contains 6-8 wild dogs, as well as a multitude of wild dogs mixed in with other spawns.

This information has been compiled as part of the update history project. Some updates may not be included - see here for how to help out!
Retrieved from ‘https://runescape.wiki/w/Dog?oldid=34038022’
Categories:
Hidden categories: