From the RuneScape Wiki, the wiki for all things RuneScape
Jump to: navigation, search
Divine shard? (edit)

A divine shard is an item worth 30 divine tears when deposited. It is obtained by mining Rock debris, a fallen rock, which is one of the random events on the Battle of Lumbridge battlefield. Players may only have 1 divine shard at a time and must deposit their current one before collecting more. This item cannot be banked. 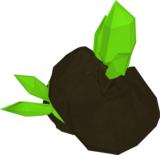 Occasionally a message will appear in the chatbox: Rocks are falling from the sky. Avoid them!; shortly thereafter, small rocks will shower from the sky finishing with one large rock fragment falling to the ground. The rock fragment will have large green crystals protruding from its surface can be mined to obtain a Divine shard. Each rock may contain several divine shards, and multiple players may mine it at the same time. Anywhere from 1 to 5 shards may be collected from a fallen rock.

If a player is fast enough, Divine Shards can be used to accumulate a large amount of divine tears in a very short amount of time. This can be done by quickly mining and depositing several divine shards. The best way for a player to do this is to mine a fallen rock as soon as it falls in order to obtain a shard, then use the player's faction token to teleport to their god's camp. Then, quickly run back to the fallen rock and mine it again for another shard, and repeat the process until no fallen rocks remain on the map. This method will work optimally providing that the rock debris falls just outside the player's faction camp. Using this method can allow a player to easily collect 3 or 4 divine shards, each of which earns the player 30 renown when deposited. When using this method, it is important to keep in mind that the faction token will only teleport the player to their god's camp up to 10 times per day.

Depositing a divine shard counts towards the limit of 1320 divine tears (3000 for members) per day.