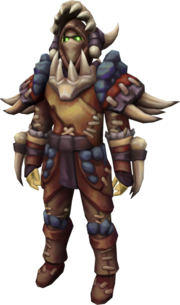 Dinosaurhide armour is a set of level 75 Ranged armour that was released on 8 July 2019. It consists of five pieces, all of which require 75 Defence to wear and 93 Crafting to create.

When first used in combat, dinosaurhide armour will begin to degrade. After 60,000 charges of combat (a minimum of 10 hours), they will become broken. Scales can be added to partially degraded armour in order to restore it to pristine condition, and players can check the status of armour pieces with the right-click Check option.